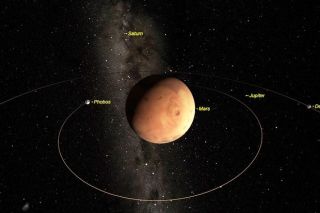 This friday, Mars will reach opposition. The Red Planet will roughly align with the Earth and the sun in the sky. You can watch the incredible astronomical event live or online.
(Image: © Starry Night software)

Mars will be at its closest and brightest to Earth in 15 years over the next few days, and you can share in the excitement by watching online or at local star-viewing parties.

The Red Planet will reach perihelic opposition tomorrow (July 27) at 1:07 a.m. EDT (0507 GMT). According to Sky & Telescope, Mars will be directly opposite from the sun as seen from Earth, and will be at its brightest. It also will be visible in the sky all night, from sunset to sunrise.

Then Mars will reach its closest point to Earth on Tuesday (July 31), when the surfaces of the two planets are only 35.7 million miles (57.5 million kilometers) apart, according to the article. If you head outside, you can see Mars in southern Capricornus. The planet will remain bright for several weeks, and you can also view the planets Saturn, Jupiter and Venus in a "long arc across the sky from east to west" shortly after sunset, the magazine said. [How to Use Mobile Apps to Watch Mars' Closest Approach Since 2003]

But if it's rainy in your neighborhood or you can't get to a dark spot, you can always catch the Mars opposition online. Viewers can tune in to a short webcast on Slooh today ( July 26) at 10 p.m. EDT (0200 GMT) to gaze at Mars and hear from Paige Godfrey, a physicist who performs public outreach and  who also has studied exoplanets and brown dwarfs (failed stars). The webcast is available on Slooh's website for members, and will also stream here on Space.com, courtesy of Slooh.

"For the past few weeks, Mars has been brighter than Jupiter, which is normally the second-brightest planet in the night sky after Venus. Mars is about two times brighter than Jupiter this month, and will remain so until early September," Slooh representatives said in a statement.

There are also plenty of viewing parties across the globe at local planetariums or science museums, so be sure to check your community calendar to see if there is one in your community. Here is a sampling, with all times listed below in the event's local time; the views of Mars, of course, are weather permitting.

Editor's note: If you snap an amazing photo of Mars and would like to share it with Space.com Space.com for a story or photo gallery, send comments and images to spacephotos@space.com.