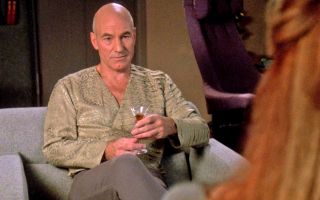 Capt. Picard was the astronaut my teenage self wanted to be. Today, he's the human I want to be.
(Image: © CBS Broadcasting)

I have an embarrassing confession to make, as the geek internet explodes over actor Patrick Stewart reprising his role as Jean-Luc Picard in a new CBS series. I never saw "Star Trek: The Next Generation" (TNG) while it was on the air, even though I was old enough to do so in the 1990s.

The reason was simple economics. I had a pleasant childhood but grew up in a single-income family. My folks preferred using their limited income to take their kids to science museums and on educational experiences, rather than buying cable television – the only way to watch "TNG" in Canada.

But to their credit, they knew about "Star Trek" and found a cheaper way to introduce me to the "TNG" universe – VHS tapes from Blockbuster. (My, I'm dating myself.) We watched all the "Star Trek" films in order in the mid-1990s. I wasn't too impressed when I saw Jean-Luc Picard (played by Stewart) in "Star Trek Generations" (1994). But "Star Trek: First Contact" (1996) was another matter altogether. [6 'Star Trek' Captains, Ranked from Worst to Best]

Looking back now, it's a classic Trek trope: the USS Enterprise crewmembers get caught in a time-travel problem and they need to extricate themselves from it. In this case, they find themselves fighting with the all-powerful, assimilating Borg aliens at the same time that people on Earth are fighting to fly the first warp-drive craft.

Picard was simply awesome in "First Contact." He was haunted from having escaped captivity with the Borg – a species that assimilates other species it meets into a collective – years before. While grappling with post-traumatic stress disorder, he asked the crew to keep fighting the Borg to save the Enterprise, even though the Borg were clearly winning the battle.  He even smashed a glass display case full of spaceships, usually displayed with pride in his office. But in the end, he listened to the advice of a woman he rescued from Earth while she was injured during a skirmish. She used an example from classical literature – Moby Dick – to show Picard he can't win by fighting.

I liked this guy. He was powerful, yet vulnerable at the same time. He used Shakespeare quotes to better understand the scientific exploration of the universe. He listened to others. Above all, Picard was a great leader – a captain who took the time and effort, even in an emergency, to mentor his younger crewmembers.

Picard was the astronaut my teenage self wanted to be. And today, he's the human I want to be.

We fans all knew that Picard was a fictional television character, but he was representative of a show that was very open to discussing difficult subjects, such as gender equity. A friend once said to me, "'TNG' would have won Emmys if they weren't all in funny costumes."

When I was in my 20s, I finally saw all seven seasons of "TNG" on Netflix. The first episode that stood out for me was "The Measure of a Man." Picard was put on the defense stand, trying to explain to a skeptical Starfleet why his android crewmember Data (Brent Spiner) shouldn't be dismantled. Picard's summation was worthy of any courtroom speech about human rights, as he made Starfleet officers realize why dismantling Data was wrong: "Starfleet was founded to seek out new life," he declared. Referring to Data, he continued: "Well, there it sits! Waiting."

Over seven seasons, I saw a strong captain admitting to vulnerabilities. In "Tapestry," Picard is sent to the afterlife by the godlike creature Q to explore the mistakes of his youth, including how he betrayed some friends early in his career. Picard tussled multiple times with the Borg, at first seeing them as merely a faceless enemy. Over time, he grew to respect individual members of the collective who were trying to help humanity.

Picard was also good at assimilating hard experiences and using them to make himself better. Another critically acclaimed episode, "The Inner Light," has Picard living a lifetime on another planet in only 25 minutes of "real" time, because a space probe makes his mind believe that he has somehow arrived on another world and joined another family. Among other experiences, he married and learned how to play the flute. It turned out that this experience came courtesy of a space probe, designed to share memories of its dying people. Although Picard had to grapple with the loss of his alternate life, he willingly kept a flute found inside the probe.

And if we can leave the "Star Trek" universe for a moment, let's point out that Stewart (as far as one can tell of a celebrity, at least) appears to be a moral person in his own right. He's famous for six decades of acting on stage, television and screen. But he's nearly equally famous for speaking out in support of the LGBTQ community, women and other marginalized groups.

And at age 78, he still makes regular appearances at comic conventions to continue to inspire fans. In 2012, I met Stewart for 10 seconds as I stood in a typical, overcrowded autograph line in Calgary, Alberta. "Thank you for all you do," I said. "I love my job!" he boomed in a Picard-worthy voice.

There's a footnote to my "Star Trek" origin story. Nearly 20 years after I watched "First Contact," two of my close friends (a couple themselves) urged me to sign up for an online dating site. "Those never work out," I said to my friends. "Do it anyway," they commanded. This same couple once awarded me a Starfleet Academy diploma on my birthday, so I felt they had my best interests at heart.

Reluctantly, I made out a profile on a generic site. "Join me for a five-year mission!" my profile heading read. I typed a quick description of what I wanted, included some joking references to "Star Trek," and then moved on to other things. Less than 48 hours later came a response. In part, it said something like: "Who's your favorite captain? And don't say Pike; that's cheating because he didn't have a show about him."

The Pike reference blew me away – this person really knew his "Star Trek." But I answered with "Picard" because of the captain's logic and ability to solve problems. The anonymous gentleman agreed with me. We met up, and eventually agreed to extend our mission to a lifetime. Two years after that hastily written dating profile, I walked down the aisle to the tune of the theme song to "Star Trek: First Contact."

I never would have imagined a story about the Borg eventually leading to marriage, but there you have it. I can thank Stewart not only for the fun "Star Trek" stories I get to write here on Space.com, but also for helping me meet my science-geek husband. Picard was the perfect filter to find the person who met my interests.

And now Picard's coming back to inspire a new generation of youngsters with a new "Star Trek" series. What amazing things will today's teenagers do after watching Picard on-screen? Walk on Mars? Help solve a burning scientific problem, such as curing cancer? Or simply pass on love and respect and a drive for exploration to their own children, the "next generation" of space fans? I can't wait to find out.