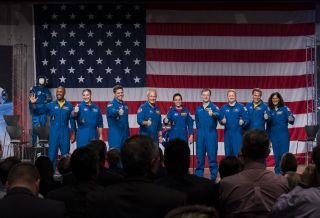 HOUSTON — Call them the Commercial Crew Nine. NASA has unveiled the first astronauts to fly on private spaceships built by SpaceX and Boeing, and, just like the original Mercury Seven, NASA's first astronauts announced in 1959, these 21st century space travelers have "the right stuff."

NASA made the announcement today (Aug. 3) here at the Johnson Space Center, with the agency revealing the eight agency astronauts and one Boeing astronaut before a cheering crowd of lawmakers, dignitaries and kids waving signs and American flags. The astronauts will be the first Americans to launch into orbit from U.S. soil since NASA's space shuttle program shut down in 2011.

"This is a big deal for our country, and we want Americans to know that we are back," NASA Administrator Jim Bridenstine told the crowd. "We're flying American astronauts on American rockets from American soil." [Meet the SpaceX and Boeing Astronaut Crews]

The Boeing and SpaceX crewed test missions are arguably the most anticipated spaceship test flights this century. There are four flights in all — two each for SpaceX's Crew Dragon and Boeing's CST-100 Starliner vehicle — scheduled to launch to the International Space Station (ISS) throughout 2019 once uncrewed test flights are complete.

Flying the first crewed flight on Boeing's CST-100 Starliner are NASA astronauts Eric Boe, Nicole Aunapu Mann and Boeing astronaut Chris Ferguson. Ferguson is a former NASA astronaut and space shuttle commander who now works on Boeing's Starliner program. Their mission will launch in mid-2019, if everything goes according to plan.

"It's absolutely the opportunity of a lifetime," Mann, a Marine Corps lieutenant who joined NASA in 2013, said during the announcement. "As a test pilot, it doesn't get any better than this."

"The first flight is something that you dream about as a test pilot and, you know, you don't think it's ever going to happen to you," he said. "But you know, it looks like it might."

It's been a long trip for these astronauts. Years, in fact.

It was back in September 2014 when NASA first announced that SpaceX and Boeing would fly NASA astronauts to and from the International Space Station. At the time, SpaceX's Crew Dragon (known as Dragon V2 at the time) and Boeing's Starliner (just CST-100 back then) won a four-year competition — and contracts worth billions — to fly astronauts to space. [Take a Walk Through SpaceX's Crew Dragon Spaceship]

Then, in July 2015, NASA offered another nugget: Four of its astronauts had been tapped to start training on SpaceX's Crew Dragon and Boeing's Starliner. Those were Behnken, Boe, Hurley and Williams. The astronauts have been training with SpaceX and Boeing, on top of their NASA work, ever since.

Today's crew announcement for the SpaceX and Boeing test flights is a major step for NASA's push to restore American crewed access to space from U.S. soil. NASA's last space shuttle mission, the STS-135 flight coincidently commanded by Boeing's Ferguson, flew in July 2011. Since then, NASA has been dependent on Russia's Soyuz rockets and spacecraft, paying upward of $70 million per seat to fly Americans to and from the ISS.

Some of the newly named crew, like Cassada, joined NASA expecting to fly on Soyuz spacecraft before any new American ship. "I'll tell you, being able to launch to the International Space Station from U.S. soil, I can't imagine better," Cassada said.

Glover, who also joined NASA in 2013, summed it up simply.

"This is the stuff of dreams … this is a test pilot's dream," he said.

SpaceX's Crew Dragon will launch on the company's Falcon 9 rocket. Both vehicles are reusable. Boeing's spacecraft CST-100 Starliner is also expected to be reusable and will launch on a United Launch Alliance Atlas V rocket. SpaceX aims to launch an uncrewed test flight in November of this year, with a Boeing test flight scheduled for late 2018 or early 2019. [How Boeing's Commercial CST-100 Starliner Spacecraft Works]

Those launch targets may change. In fact, they've already changed this week.

Earlier this year, NASA unveiled a commercial crew schedule that called for the first uncrewed test flights by SpaceX and Boeing this month. The first crewed flights would then follow by the end of 2018. But that changed Thursday (Aug. 2) when NASA rolled out a set of new launch targets.

NASA, SpaceX and Boeing have repeatedly stressed that they will fly only when the vehicles are ready.

SpaceX President Gwynne Shotwell touched on that today during the crew announcement. SpaceX CEO Elon Musk, she said, founded the company in 2002 to build the safest and most reliable spacecraft possible.

"The 7,000 women and men of SpaceX understand what a sacred honor it was for us to be part of this program and for us to fly you," Shotwell told the astronaut crews. "We take it seriously. We won't let you down."

Editor's note: An earlier version of this story incorrectly stated the name of Josh Cassada as John Cassada. It has been corrected in the story above.