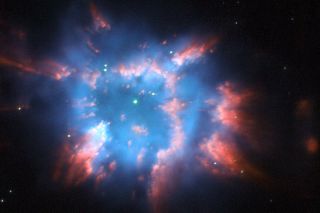 This Friday, NBC News is celebrating everything space. In time for the longest lunar eclipse of this century, NBC will be streaming a digital special called "Space is Awesome."
(Image: © ESA/Hubble & NASA)

NBC will celebrate the longest total lunar eclipse of the 21st century with an awesome digital special on all things space.

Tomorrow (Friday, July 27), Mars will reach opposition, roughly aligning with Earth and the sun. Around this same time, there will be a total lunar eclipse — the longest of this century — and Mars will appear brighter than it has in years. Mars will also near its closest point to Earth around this time.

To mark this exciting string of astronomical events, NBC News will stream a digital special called "Space is Awesome" tomorrow. The special will explore the mysteries of space, and dive into the history and science behind these upcoming events.

In addition, a panel of scientists will explain what the lunar eclipse is and why it happens. They will also discuss the history of eclipses. And to complement the eclipse coverage, program host Simone Boyce will explore issues of gender in astrophysics, NBC representatives said in a statement.

Boyce will interview female astrophysicists and professors from Princeton University about their work and how they are navigating the male-dominated industry.

The program will also devote some time to the pending "Space Force." Guests on the special — including Space.com's own Hanneke Weitering — will talk about the idea of the Space Force and if and how they think it will affect the future of American space travel and international space relations.