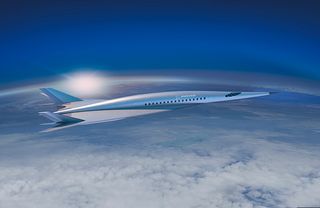 Boeing unveiled a new hypersonic passenger plane concept at the AIAA Aviation Forum 2018 in Atlanta on June 26, 2018. The plane could have military or commercial uses, Boeing says.
(Image: © Boeing)

Boeing has dreams of a hypersonic passenger plane, and it looks like something straight out of science fiction.

The hypersonic aircraft could have "military or commercial applications" and is just one of several such vehicles Boeing engineers are studying to develop superfast transportation technology, the company said in a statement. In an artist's concept, the plane looks sleek and futuristic, with extremely swept-back wings, twin tails and sharp, pointed nose.

Hypersonic aircraft are capable of traveling at speeds of Mach 5 and beyond. Mach 5 is about five times the speed of sound, or 3,806 mph (6,125 km/h) at sea level. NASA's space shuttles, for comparison, traveled at Mach 25 when re-entering the Earth's atmosphere. The U.S. military has tested hypersonic weapons that hit Mach 20 in the past. [Supersonic! The 11 Fastest Military Airplanes]

Boeing unveiled its hypersonic passenger plane concept Tuesday (June 26) in Atlanta at the 2018 Aviation and Aeronautics Forum hosted by the American Institute of Aeronautics and Astronautics.

"We're excited about the potential of hypersonic technology to connect the world faster than ever before," Kevin Bowcutt, Boeing's senior technical fellow and chief scientist of hypersonics, said in a statement. "Boeing is building upon a foundation of six decades of work designing, developing and flying experimental hypersonic vehicles, which makes us the right company to lead the effort in bringing this technology to market in the future."

While Boeing sets its sights on hypersonic passenger travel, NASA and others are pursuing other projects to advance commercial supersonic travel.

NASA is building the newly named X-59 QueSST experimental aircraft to test technology needed for quiet supersonic travel. The project aims to minimize the disruptive sonic booms that have prevented commercial supersonic flights over land in the past.

Meanwhile, the companies Virgin Galactic and Boom are working together on a supersonic jet designed to fly at twice the speed of sound, or Mach 2. The company Spike Aerospace is working on its own supersonic plane, called the S-512 Quiet Supersonic Jet, to shush sonic booms.