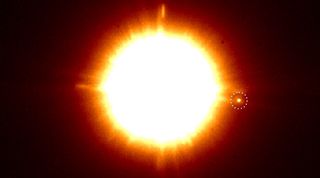 An infrared image of the binary star system CS Cha, taken by the SPHERE instrument on the European Southern Observatory's Very Large Telescope in Chile. The newly discovered companion is in the dotted circle.
(Image: © C. Ginski & SPHERE)

A mysterious "companion" that may be a newborn alien planet has been spotted zooming through space along with two young stars, a new study reports.

Astronomers discovered the newfound object while studying CS Cha, a 2-million- to 3-million-year-old binary system that lies about 540 light-years from Earth. It's unclear at the moment what the companion is, study team members said.

"We suspect that the companion is surrounded by his own dust disk," study lead author Christian Ginski, of Leiden Observatory in the Netherlands, said in a statement. (They think this because the companion's light is highly polarized, which suggests scattering by dust.) [Gallery: The Strangest Alien Planets]

"The tricky part is that the disk blocks a large part of the light, and that is why we can hardly determine the mass of the companion," Ginski added. "So, it could be a brown dwarf but also a super-Jupiter in his toddler years. The classical planet-forming-models can't help us."

Brown dwarfs, also known as "failed stars," are bigger than planets but too small to support the internal fusion reactions that power stars.

The researchers were looking for dust disks and possible newborn planets. And they got a hit — a dot in the vicinity of the CS Cha system, located about 214 AU from the binary stars. (One AU, or astronomical unit, is the Earth-sun distance — about 93 million miles, or 150 million kilometers.) The team then analyzed archival images from several scopes, eventually finding the same dot in an 11-year-old CS Cha photo by the VLT and a 19-year-old image by NASA's Hubble Space Telescope.

These other observations showed that the dot has traveled with CS Cha over time and is therefore clearly associated with the system, the astronomers said.

The team hopes to tease out the true nature of the CS Cha companion in the future, via observations with the Atacama Large Millimeter/submillimeter Array (ALMA), a powerful network of radio telescopes in northern Chile.

The new study has been accepted for publication in the journal Astronomy & Astrophysics. You can read it for free at the online preprint site arXiv.org.