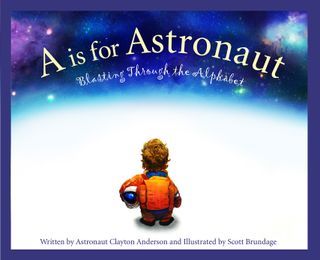 Clayton Anderson was at a bookstore in Omaha, Nebraska, when the ambush happened. "The manager of the store insisted that I come to the children's book area," the retired astronaut recalled. Anderson was meant to be signing copies of "The Ordinary Spaceman: From Boyhood Dreams to Astronaut" (University of Nebraska Press, 2015), a memoir about the 152 days he spent living and working aboard the International Space Station. But the store manager — a "lovely lady named Marcia Jussel," he told Space.com — had other ideas.

"She kept telling me to write a children's book, to which I hemmed and hawed a bit," Anderson said. "She continued to insist, becoming even more specific, saying, 'You need to write 'A is for Astronaut'!"

Anderson said he tried to blow Jussel off, but something she said stuck: She urged him to look up Sleeping Bear Press. When Googling the publisher one day, he noticed its penchant for alphabet-themed books such as "A is for Airplane: An Aviation Alphabet" and "A is for Anaconda: A Rainforest Alphabet." [Best Space Books for Kids]

"Then it dawned on me why she kept calling it 'A is for Astronaut,'" Anderson said.

Jussel eventually got her way — and the dedication in the book. Illustrated by Scott Brundage, "A is for Astronaut: Blasting Through the Alphabet" (Sleeping Bear Press, 2018) is a fun-filled romp through the mechanics space exploration, from A is for astronaut, "the bravest of souls," to Z is for Zulu, "which represents time." (Zulu time is shorthand for the time zone we know as GMT or UTC.)

With humor and flair, Anderson tackles not only the practical aspects of spaceflight (J is for jettison, "and it's like tossing out trash") but also astronomy (Q is for quasar, "an incredible star"), science (E is for energy, "be it fuel or the sun rays") and history (K is for Kennedy, "a man who had so much to say").

Unlike most picture books, which are aimed at preschoolers, "A is for Astronaut" incorporates sidebars that expand upon each concept at a grade-school reading level. This is because everyone — young, old and in between — should have the opportunity to experience the thrill and wonder of the cosmos together, Anderson said.

"It's age-appropriate for everyone," he said. "While the pictures may entrance a toddler, the rhymes may engage elementary students, and the text may bring teaching points to all."

Case in point? An 84-year-old who struggled with her memory wrote to thank Anderson for the book. "She found that it helped jog her memory about things she had experienced in her younger years," he said. "Quite a testament, I'd say."

Deftly straddling the border between realism and whimsy, Brundage's art provides the perfect complement to Anderson's words. The two have yet to meet in person, but Anderson is in awe of Brundage's ability to take an idea and run with it.

"He came up with every illustration from simply reading the manuscript," Anderson said. "He must have been a NASA astronaut and engineer in a previous life!"