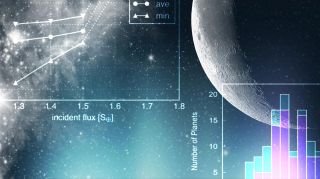 An illustration with exoplanet data in the foreground.
(Image: © Tokyo Institute of Technology)

Researchers have discovered 15 new planets around cool stars known as red dwarfs, and one of those planets might be able to host liquid water on its surface.

In a new study, the researchers combined space telescope data with follow-up ground investigation to observe several red dwarfs, which are dim stars that weigh 7.5 to 50 percent the mass of the sun. The team spotted three exoplanets, each slightly larger than Earth, around red dwarf star K2-155, located 200 light-years away. The outermost planet of the system was a particularly interesting finding, as it had a radius about 1.6 times that of Earth and may be within this star's habitable zone, the researchers said. A star's habitable zone is the region where orbiting planets could be the right temperature to retain liquid water.

The team used observations from the NASA Kepler spacecraft's second mission, K2, and ground-based telescopes such as the Subaru Telescope in Hawaii and the Nordic Optical Telescope (NOT) in Spain to gather data on the 15 exoplanets, according to a recent statement about the research. To determine if K2-155's outermost planet, K2-155d, could have water on its surface, the team modeled what's known about this world in a three-dimensional climate simulation.

They found that this exoplanet may have liquid water. But despite the exciting possibilities, the researchers remain cautious until further analysis can confirm the initial findings, according to the statement.

"Red dwarf systems, especially coolest red dwarfs, are just beginning to be investigated, so they are very exciting targets for future exoplanet research," said Teruyuki Hirano, a researcher at the Tokyo Institute of Technology and lead author of the new work.

In April 2018, the NASA mission Transiting Exoplanet Survey Satellite (TESS) is scheduled to launch; that spacecraft may provide greater precision for researchers in search of distant planets with conditions that could support life. "TESS is expected to find many candidate planets around bright stars closer to Earth," Hirano said. "This will greatly facilitate follow-up observations, including investigation of planetary atmospheres and determining the precise orbit of the planets."

The new work was detailed Feb. 23 in The Astronomical Journal.