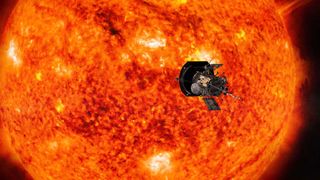 Your name could soon zoom through the sun's superheated outer atmosphere, just like William Shatner's.

The "Star Trek" actor has signed up to put his name on a microchip that will fly aboard NASA's Parker Solar Probe, which will launch on a historic sun-studying mission this summer. And he wants you to book a seat as well.

"The first-ever spacecraft to the sun, NASA's Parker Solar Probe, will launch this year on a course to orbit through the heat of our star's corona, where temperatures are greater than 1 million degrees," Shatner said in a new NASA video about this public-outreach effort. "The spacecraft will also carry my name to the sun, and your name, and the names of everyone who wants to join this voyage of extreme exploration." [NASA's Parker Solar Probe Mission in Pictures]

You can get your name on that chip for free by visiting the NASA "Hot Ticket" site through April 27.

The $1.5 billion Parker Solar Probe mission is scheduled to launch from NASA's Kennedy Space Center in Florida on July 31. If all goes according to plan, the spacecraft will perform 24 close flybys of the sun over the next seven years, at times getting within just 3.9 million miles (6.2 million kilometers) of the solar surface. That's seven times closer than any other probe has ever gotten to the sun, NASA officials said.

The Parker Solar Probe is therefore outfitted with a 4.5-inch-thick (11.4 centimeters) carbon-composite shield, which will protect the spacecraft from radiation levels 475 times greater than those we experience here on Earth and temperatures that reach 2,500 degrees Fahrenheit (1,370 degrees Celsius). The spacecraft's onboard instruments should be able to operate at room temperature despite these extreme external conditions, NASA officials said.

Those instruments will make a variety of measurements, helping to characterize the sun's structure, magnetic and electric fields and the solar wind, the stream of charged particles flowing from our star. Mission scientists hope these observations help solve two longstanding solar mysteries: how the solar wind is accelerated, and why the sun's corona, or outer atmosphere, is so much hotter than the surface (which reaches a mere 10,000 degrees F, or 5,500 degrees C.)

"Parker Solar Probe is, quite literally, the fastest, hottest — and, to me, coolest — mission under the sun," project scientist Nicola Fox, of the Johns Hopkins Applied Physics Laboratory in Baltimore, said in a statement. "This incredible spacecraft is going to reveal so much about our star and how it works that we've not been able to understand."

The Parker Solar Probe was originally called Solar Probe Plus. In May 2017, NASA announced the name change, which honors pioneering astrophysicist Eugene Parker, who predicted the solar wind's existence in 1958. In addition to the microchip with all the names, the Parker Solar Probe will also carry a copy of Parker's 1958 paper, along with photos of the scientist, mission team members have said.

Shatner's name really gets around the solar system. The actor also helped publicize a similar public-outreach effort for NASA's Mars InSight mission, which will launch toward the Red Planet this May. Shatner's name is among 2.4 million that will travel on a chip aboard InSight.