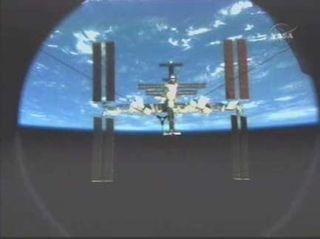 A camera aboard the space shuttle Atlantis returned this view of the International Space Station, backdropped by Earth, after the STS-117 crew undocked on June 19, 2007.
(Image: © NASA TV.)

Atlantis undockedfrom the space station at 10:42 a.m. EDT (1442 GMT) as both spacecraftpassed 213 miles (342 kilometers) above the Coral Sea off the coast ofAustralia.

Sturckowand his STS-117 crew arrived at the ISS on June 10 and performed fourspacewalks to install a new pair of 17.5-ton trusses and unfurltwo new solar arrays to the station?s starboard side. The astronauts alsostowed an older solar wing atop the station, stapled down a torn shuttlethermal blanket and assisted the Expedition 15 crew to revivevital Russian ISS computer systems after they failed last week.

?GodspeedAtlantis,? Anderson said as the shuttle pulled away from the ISS. ?Thank youfor everything.?

The STS-117crew is slated to land at 1:54 p.m. EDT (1754 GMT) Thursday at NASA?s KennedySpace Center in Cape Canaveral, Florida, with additional landing attempts onFriday and Saturday if weather intervenes, the space agency said. The shuttle hasenough supplies to stay in orbit until Sunday, though that extra day would bereserved in the case of an unforeseen malfunction, NASA officials said.

Atlantiswill take up a station-keeping position about 46 miles (73 kilometers) from theISS while its crew uses a sensor-laden boom to perform a second detailedinspection of the orbiter?s heat shield later today. Known as a lateinspection, the survey is now a standard activity for all shuttle missionsafter NASA?s 2003 Columbia accident and will scan the Atlantis? wings and nosecap for any orbital debris and micrometeorite damage sustained during thespaceflight.

NASA said late Tuesday that image analysts were also tracking the source of an apparent piece of debris seen in video cameras aboard Atlantis to determine if it came from the orbiter of the ISS.

Atlantis?STS-117 mission is the first of up to four planned shuttle flights this year tocontinue assembly of the ISS. The new solar arrays delivered by the shuttleastronauts primed the station?s power grid to support the addition of a new connecting moduleand European laboratory slated to launch later this year.

?It?sreally exciting to see the station in this configuration,? said ISS flightdirector Holly Ridings early Monday. ?I think we all feel like we accomplishedthe mission objectives.?

Shuttlepilot Lee Archambault flew Atlantis around the ISS while his crewmates photographedthe space station for engineers back on Earth. Prior to the NASA?s STS-117mission, the stationhad an off-kilter look with one set of portside solar arrays deployed andhalf of an older solar wing partly stowed atop the outpost.

?It looksbeautiful,? Sturckow said of the station?s new profile.

?The spacestation is in very, very good shape,? Riding said.

TheAtlantis crew left the ISS with additional supplies of oxygen and other cargobefore leaving the ISS, including: 115 pounds (52 kilograms) of oxygen, 1,660 pounds(752 kilograms) of water, and some spare parts to replenish those used in theRussian computer system fix.

The shuttleis returning about 1,500 pounds (680 kilograms) of experiments, unneededequipment and other items from the ISS.

Carrying ona new tradition aboard the ISS, Anderson has already come up withhis own game to play with Mission Control on Earth dubbed ?Space TravelerTrivia? and the end of each day.

?Clay, wethink, is going to be a lot of fun,? Ridings said.

LateMonday, Yurchikhin lamented today?s departure of Atlantis after a heartfeltfarewell ceremony between the station and shuttle crews.

?Everythingis kind of empty, devoid of life,? the Expedition 15 commander told RussianMission Control of the ISS.