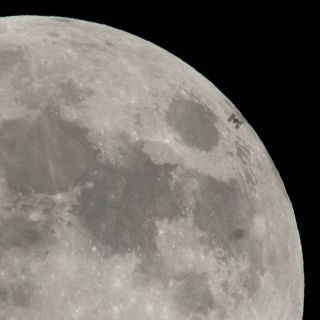 NASA photographer Bill Ingalls captured the shot from Alexandria, Virginia, on Tuesday (Jan. 30) — a day before the full moon plunged into Earth's shadow in the first total lunar eclipse since September 2015.

There's a lot more to say about Wednesday's skywatching spectacle, of course. The eclipse involved a moon that was both "blue" (it was the second full moon of January) and "super" (it was near the closest point to Earth along the moon's elliptical orbit).

The "blood" part, by the way, refers to the coppery-red color the moon often assumes during a total eclipse. This comes from reddish wavelengths of sunlight refracted by Earth's atmosphere onto the lunar surface. (Other wavelengths are shorter and get scattered by molecules in our air.)

Such an eclipse hadn't occurred anywhere in the world since 1982, and not in the United States in more than 150 years.

The ISS is currently fully staffed, with six crewmembers on board. They are NASA astronauts Joe Acaba, Mark Vande Hei and Scott Tingle; cosmonauts Alexander Misurkin and Anton Shkaplerov; and Norishige Kanai of the Japan Aerospace Exploration Agency.

In case you're wondering, it looks like the space station's crew was not able to see the Super Blue Blood Moon eclipse. The eclipse occurred while the crew was busy working, and most of the station's windows point down toward the Earth, making it hard to bring the moon in view. Kanai shared that news Wednesday on Twitter after the lunar eclipse ended.