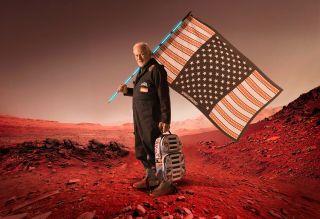 Buzz Aldrin poses with a solar backpack and gear from his limited-edition "Mission to Mars" fashion line with Sprayground.
(Image: © Sprayground)

As Lunar Module pilot for NASA's historic Apollo 11 mission, Buzz Aldrin flew to the moon and back in a space capsule. Now, the former fighter pilot, aerospace engineer, bestselling author and reality-show contestant is setting his sights on a different kind of capsule — the kind you only hear about in fashion.

Together with Sprayground, a New York-based accessories label, the second human to set foot on the moon has created his "first and only fashion collaboration": a "Mission to Mars"-themed capsule line — which is to say, small in scope — that features a parka, a solar-panel backpack, a duffel bag, a baseball cap and gloves — all emblazoned with a colorful assortment of patches, including one featuring Aldrin's face and the words "Moon, Mars, and Beyond." [In Photos: Buzz Aldrin's Mars Fashion Line with Sprayground]

All the pieces are limited-edition and never to be produced again, Sprayground representatives said in a press release.

Why Mars? Aldrin has long argued that we need to put the first humans on Mars by 2040. He even wrote a book that makes a case for permanent settlements on the Red Planet.

"Let's be certain that we've developed a sustainable plan to stay on Mars," Aldrin told Space.com in May. "No flags and footprints this time."

Indeed, the gloves display one of Aldrin's favorite exhortations: "Get Your Ass to Mars." Other iconography includes Sprayground's signature "shark maw" design, the American flag and the word "Mar$" in a font reminiscent of the old "NASA worm" logo. The spartan color palette of black, white and gray is enlivened by pops of orange that recall NASA's launch and entry spacesuits.

Despite its outward incongruity, the partnership was a natural one, the company said. David Ben-David, who founded Sprayground in 2010, is a "dreamer and doer" who has been enthralled by space since he was a child. And Aldrin didn't only lend his name to the collection, but he provided active input, as well.

"Teaming up with Buzz Aldrin to create this capsule was a dream come true, and the two of them are proud to present a line, a vibe, and a culture that isn't limited by convention," Sprayground said.

Sprayground hails Aldrin as the astronaut for today's generation.

"Not only was he the second man to walk on the moon via Apollo, he moonwalked on 'Dancing with the Stars,' took the first 'space selfie' on Gemini, and now his vision is spearheading a grassroots movement for us to explore Mars," the company said. "His adventurous spirit captivates dreamers and doers of all ages, people not afraid to push the envelope at work, in fashion, in life."

Prices for the line range from $30 for the baseball cap to $325 for the parka.