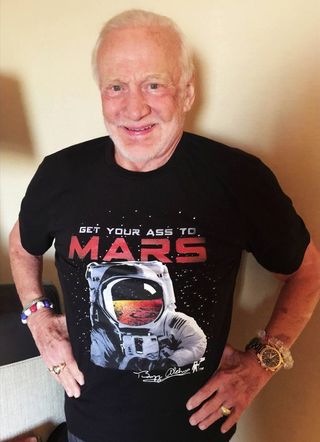 Buzz Aldrin modeling his new "Get Your Ass to Mars" T-shirt, the sales of which will benefit his educational ShareSpace Foundation.
(Image: © Buzz Aldrin/Facebook)

The 50th anniversary of the first human landing on the moon would be a fine occasion to kick off a serious effort to put astronauts on Mars, Buzz Aldrin says.

Buzz Aldrin would like the president of the United States — whomever it happens to be — to announce a firm crewed Mars commitment on July 20, 2019, the "golden anniversary" of the giant leaps Aldrin and fellow Apollo 11 astronaut Neil Armstrong took on the lunar surface in 1969.

"We can progress with a national holiday of July 20, and begin to remind people of all the great progress that we made in the '60s and '70s, and how that reflects through cooperative means into the future," Aldrin told Space.com. [Buzz Aldrin's Visions For Missions: Mars and More: Part 1 (Video)]

"In July 2019, the U.S. president could commit to, within two decades — America will lead international landings on Mars," Aldrin added. "Clarifying a lot of details could happen before that president leaves office [at the end of his or her] second term around 2024. I think we could then certainly be landing people before 2040."

That timeline aligns with that of NASA, which aims to put boots on Mars sometime in the 2030s. On Thursday (Oct. 8), the agency released a 36-page report outlining the basics of its three-phase Mars plan, which involves gaining experience and testing technologies in low-Earth orbit and regions around the moon before heading toward the Red Planet.

"I'm in the process of going over and studying that particular release from NASA, and I think it's very well thought-out and very well written, justifying why we're doing this and how we're going to go about doing it," Aldrin said.

Aldrin is a passionate proponent of crewed Mars exploration with his own ideas about how best to set up a Red Planet outpost. For example, he advocates the use of an "Aldrin Mars cycler" spacecraft that would cruise from Earth to Mars and back again regularly on a special fuel-minimizing trajectory.

Aldrin explained his Mars plans in the 2013 book "Mission to Mars: My Vision for Space Exploration" (National Geographic), which he wrote with Leonard David, Space.com's Space Insider columnist. Aldrin then laid his concept out for kids in "Welcome to Mars: Making a Home on the Red Planet" (National Geographic Children's Books, 2015).

Indeed, getting kids interested in space and science is a priority for Aldrin, whose ShareSpace Foundation operates with this goal in mind.

Kids "are about ready to let go of dragons, and we want them to hold onto space," Aldrin said. "We're trying to improve our education system, and it starts at this very basic, younger level — to get them really thinking about what the future holds."

He is currently selling T-shirts of his own design that depict an astronaut on the Martian surface, with a famous quote from the 1990 sci-fi film "Total Recall" emblazoned above — "Get your ass to Mars."

"I couldn't think of a better way to begin to develop a motto, a potential song and something that is really representing that we're on the move" to Mars, Aldrin said of the quote.

All of the profits from sales of the T-shirt, which cost $22.99 each, will benefit the ShareSpace Foundation. The shirts went on sale Monday (Oct. 5) to celebrate World Space Week, the release of the new film "The Martian" and the recent discovery that seasonal dark streaks on some Red Planet slopes are caused by flowing water, Aldrin said in a Facebook post.

The shirts are available through Oct. 19. You can check them out here: https://represent.com/buzz