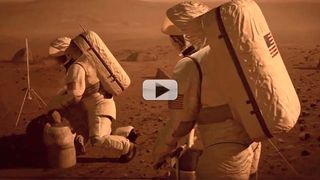 NEW YORK — Famed astronaut Buzz Aldrin, the second human ever to walk on the moon, has a vision for humanity's future in space. And that vision points not to the moon, but Mars.

Manned exploration of the Red Planet is the subject of Aldrin's latest book "Mission to Mars: My Vision for Space Exploration," written with veteran space reporter Leonard David. The book launches this week and Aldrin will discuss his vision for Mars settlement on Monday (May 6) with SPACE.com managing editor Tariq Malik. We'll have an initial video look at the interview on SPACE.com Monday afternoon.

In a video preview for "Mission to Mars," which is published by National Geographic Books, Aldrin says that humanity is currently living in a "crucial time" when it comes to space travel. In 1903, the Wright brothers ushered in the era of powered flight and just 66 years later, in July 1969, Aldrin and Neil Armstrong became the first humans to walk on the moon. But will astronauts be homesteading on Mars in 2035 — 66 years after the historic Apollo 11 moon landing? That, Aldrin says, is the goal. [Private Mars Mission by 2018 (Photos)]

"We need to make sure that the experience that we've invested in at the moon helps us to be the leader to establish the first human beings that set foot on the planet Mars," Buzz Aldrin says in a video preview for the book.

NASA's current vision for deep-space exploration has Mars as a distant goal, a place to explore with astronauts sometime in the 2030s. A visit to an asteroid by 2025 is the primary goal. Earlier this year, NASA unveiled a new plan to capture a small asteroid robotically and tow it near the moon so astronauts can explore it closer to home.

In "Mission to Mars," Aldrin sees such as asteroid mission as a practice run for reaching Mars. And he clearly states that while the U.S. may provide a leadership role in the development of scientific outposts on the moon, the country and NASA should not let the moon distract from the more distant goal.

"It's a reasonable time to contribute to the history of the human race by establishing a growing settlement with sustainability on the surface of Mars," Aldrin says in the video. "Now that's exciting to me."

Visit SPACE.com Monday afternoon for an initial look at our discussion with Buzz Aldrin.