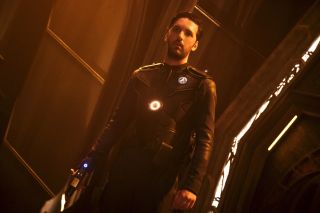 "Star Trek: Discovery" was an action-packed episode this week for the show's midseason finale, featuring Klingon fighting (both by ship and by hand), and lots of use of the spore drive. The episode also ended up being weirdly timely as the crew discussed a serious issue making the rounds in Hollywood these past few weeks.

The crew appears to be in a bad spot as they finish out the first half of Season 1 — more details below. We're anxiously awaiting their return in the new year. "Star Trek: Discovery" returns to CBS All Access in the United States on Sunday (Jan. 7). "Discovery" was also renewed for a second season, although a release date has not been disclosed yet.

Episode 8 ended with the Klingons and the USS Discovery both about to meet above the planet Pahvo. The residents of that planet brought the two warring parties together to seek peace, but Starfleet isn't having any of that.

This week's Episode 9 opens with Capt. Gabriel Lorca (Jason Isaacs) receiving a direct order to retreat and find another way to disable the Klingons' ship-cloaking technology — the aim of his failed mission to Pahvo. We all know Lorca by now, so it's unsurprising that he disobeys this order and plans to fix the problem using that troublesome spore drive that warps Discovery from place to place instantly.

The crew beams Michael Burnham (Sonequa Martin-Green) and the USS Discovery security officer Ash Tyler (Shazad Latif) aboard the Klingon ship to place two beacons on board. Meanwhile, Lt. Paul Stamets (Anthony Rapp) uses his special connection with the spore drive to guide 133 small jumps in circles around the Klingon ship. Between the beacons and the jumps, Discovery determines how to detect the Klingon ship's position in space, rendering the cloak useless.

The spore drive is already hurting Stamets' brain even before the 133 jumps. It's unclear that he will survive the ordeal, and initially he doesn't want to do it. Lorca then shows Stamets that the spore drive's jumps are mapping out the locations of alternative universes. Stamets, always the explorer, bravely agrees to do the jumps as requested, but as we'll see this probably wasn't the best decision on anyone's part.

Stamets says, "I love you," to boyfriend and doctor Hugh Culber (Wilson Cruz) as he goes through jump after jump. Culber, who yells, "I love you, too," back to Stamets, keeps Stamets alive with medication. Eventually the crew successfully carries out their mission, mapping the ship's location and retrieving Burnham and Tyler (plus two more unexpected visitors), which lets them blow up the Klingon ship.

Stamets emerges and all appears to be well until he prepares to perform one last jump to get Discovery back to a Starfleet base. Stamets and Culber talk about vacation plans and share a rare on-screen gay kiss (prompting an all-caps "awww" in my notes on this episode).

But something goes wrong when Stamets connects himself to the spore drive one last time. (Pro tip: Never talk about vacation or retirement plans after one last mission, because something is bound to go wrong.) He collapses, the jump fails and Discovery is stranded somewhere. The crew can't figure out the ship's location; perhaps it's one of those alternative universes we just heard about? All we know is they are surrounded by Klingon debris. Stamets, meanwhile, is hallucinating and ill, but we don't yet know how bad his condition is.

Cue end of episode and a long wait until January 2018, when we find out more in the second half of this season. [The 10 Best Star Trek Episodes (Including All Network Series)]

It's worth spending a few minutes on the scene near the episode's end, when Tyler reveals to Burnham that a Klingon abused him.

Tyler, for those that have been following the show, lasted 227 days in a Klingon prison where unfortunate captives typically were tortured and killed in much less time. The reason he survived, he tells Burnham, is a particular Klingon –— L'Rell (played by Mary Chieffo) took a sexual interest in him. It was only by encouraging it that Tyler lived. He added quickly that he does not regret the decision, as he met Burnham after surviving the ordeal. [The Evolution of 'Star Trek' (Infographic)]

We've all heard the various revelations coming out of Hollywood these past few weeks about actors or other industry heavyweights accused of abusing other people. (This included an accusation by "Discovery" star Anthony Rapp against actor Kevin Spacey, who is now in treatment.)

"Star Trek" is a show that historically embraces diversity and discussion of difficult topics. Although no one could have predicted the ongoing firestorm of controversy in Hollywood lately as Episode 9 aired, it's good to see the issue of power and abuse discussed so openly in fiction as well as in real life. It's only by shining a light that we as a society can start to come to solutions.

"Star Trek: Discovery" returns to CBS All Access in the United States on Sunday (Jan. 7). Each episode is available at 8:30 p.m. Eastern time.