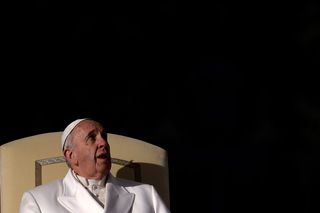 Pope Francis is planning to make a call to the International Space Station tomorrow (Oct. 26) to speak with Expedition 53 crewmembers.

The video call will begin at 9 a.m. EDT (1300 GMT), and a webcast of the in-flight interview will broadcast live on NASA TV and on The Vatican's YouTube page. You can also watch it live here on Space.com.

The Oct. 26 conversation will be the second time a pope has spoken with astronauts aboard the orbiting lab. In 2011, Pope Benedict XVI made the first call to astronauts in orbit from the Vatican Library in Rome. [Space Station Photos: The Expedition 53 Crew in Orbit]

"This is actually an event that was set up by our colleagues at ESA and ASI," Huot said. (ASI stands for Agenzia Spaziale Italian, the Italian Space Agency that is part of ESA.) "They did it the last time two Italians were onboard in 2011 — Paulo was there," Huot added.

The Pope asked the astronauts several questions about their unique vantage point in space and how it affected their view on the origins and destiny of the universe and humanity. He called the conversation an "extraordinary opportunity" and expressed his admiration for the astronauts’ "courage" and "discipline."

Pope Francis has also demonstrated his faith in science by publicly supporting theories of evolution and the Big Bang. Be sure to tune in to tomorrow's live broadcast to see what themes the Pope will discuss with the astronauts on the space station.