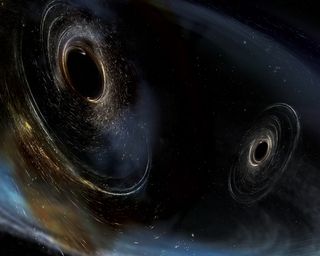 Gravitational-wave hunters have a new tool in their arsenal.

The Virgo gravitational-wave detector in Italy has made its first detection of ripples in the fabric of the universe, the collaboration announced today (Sept. 27). The signal was created by two black holes merging together and warping the space around them, creating gravitational waves that rippled through space and traveled 1.8 billion light-years to Earth.

The Laser Interferometer Gravitational Wave Observatory (LIGO), based in the U.S., also detected the event (officially called GW170814), making this the first joint detection by the observatories. LIGO made history in 2016 when it announced the first-ever direct detection of gravitational waves; this is now the fourth event detected by LIGO. [Hunting Gravitational Waves: How LIGO Works (Infographic)]

The LIGO and Virgo detectors observed the signal on Aug. 14, only two weeks after Virgo began an observation period. The two black holes had masses about 31 times and 25 times the mass of the sun. When merged, they created a new black hole with a mass about 53 times that of the sun (some mass was converted into energy, in the form of gravitational waves). The two black holes (and the final, single black hole) are in the same mass range as the black holes previously detected by LIGO.

The Virgo facility has been undergoing a major upgrade for the past six years, but is now expected to run in tandem with LIGO going forward. Having both collaborations online allows scientists to narrow down the location of the source of the gravitational wave signal. LIGO and Virgo alerted 25 other observational facilities (mainly telescopes that detect light) to the area in which the signal was received, but observations by those facilities didn’t reveal a light signal associated with the black hole merger, according to a statement from LIGO.

LIGO is funded by the National Science Foundation. Virgo is a collaboration between the National Center for Scientific Research (CNRS) in France, and Italy's National Institute for Nuclear Physics (INFN).

Back to the source

LIGO consists of two detectors — one in Livingston, Louisiana, and one in Hanford, Washington. The dual detectors serve to confirm the detection of a gravitational-wave signal. They also help scientists triangulate the location of the source of the gravitational waves, because the waves reach the different detectors at different times. The addition of the Virgo detector to this network will further help in that pursuit.

"This particular wave that we saw [on Aug. 14] first hit the LIGO Livingston detector, then the LIGO Hanford detector, and then a few thousandths of a second later it came across the Virgo detector," David Shoemaker, spokesman for the LIGO Collaboration, said at a news conference today (Sept. 27). "A bit like a photographic tripod, with its legs at slightly different lengths, we can use those different times as measurements of distances to the source. And we can follow the path back up to where the legs of this tripod meet to get an idea of just where that source is."

The sky region for GW170814 has a size of only 60 square degrees, according to Virgo representatives, which is more than 10 times smaller than what was possible with LIGO alone.

Locating the source of the gravitational waves could provide an opportunity for scientists to study those objects with other telescopes and instruments, Virgo representatives said at the news conference. This is known as "multi-messenger astronomy," meaning scientists collect different forms of information from an object, such as light (electromagnetic radiation), subatomic particles (like neutrinos) and gravitational waves.

All five of LIGO's detections, including this most recent one, came from merging black holes with masses of about 10 to 100 times the mass of the sun. Per their name, black holes do not directly radiate light and as a result, they are fundamentally invisible to telescopes that collect light. But some black holes produce indirect sources of light. Very massive black holes, hundreds of time the mass of the sun, that lie at the center of galaxies, become visible when material surrounding the black hole is accelerated, and radiates light. In some cases, this arrangement creates incredibly bright objects, called quasars.

With Virgo online, gravitational-wave scientists have a better chance of finding the location of these black hole pairs, which could allow other telescopes or observing instruments to search those areas for signs of light, the Virgo and LIGO representatives said.

Gravitational waves were first predicted by Albert Einstein, who showed that space is not a void in which cosmic events take place, but more like a fabric that can be curved, stretched and otherwise warped by gravity. Black holes warp space-time like a bowling ball on a rubber sheet. Einstein also showed that time is part of this universal fabric, such that the warping of space can also warp the passage of time for an observer. He dubbed this universal fabric "space-time."

In his theory of general relativity, Einstein provided a detailed description of how gravitational waves should behave. But it wasn't until LIGO made its detections that scientists could directly compare Einstein's predictions with reality.

So far, Einstein has been proved right once again. Virgo's orientation relative to the two LIGO detectors has allowed scientists to observe how the waves propagate through the three dimensions of space-time, or what the scientists call the polarity of gravitational waves, according to Frédérique Marion, a Virgo data scientist and senior scientist at the Annecy Laboratory of Particle Physics in France.

"This was the very first opportunity to check this fundamental property of gravitational waves," Marion said of the most recent detection. "The analysis of the [Aug. 14] signal shows that it is consistent with the polarization that is allowed by Einstein's theory."

The Virgo experiment came online at the beginning of August after being offline for six years to undergo a major upgrade known as Advanced Virgo. The LIGO observatory also underwent a major upgrade, called Advanced LIGO, but completed the upgrade sooner and was able to start taking data in 2015.

The LIGO and Virgo instruments have been taken offline again, and will remain so while engineers work to improve their sensitivity by about a factor of two, Shoemaker said. When they come back online in fall 2018, the network will be able to search a larger area for gravitational- wave events.

An increase by a factor of two "may not sound very impressive," Shoemaker said, but that would mean increasing the volume of space that these instruments can search for signals by a factor of eight.

"To me, it looks like the future is incredibly bright for LIGO, for Virgo, for the Virgo-LIGO network, for gravitational-wave astronomy, and then for the greater astronomical environment which we can now study with gravitational waves [as well as] with electromagnetic radiation," Shoemaker said.