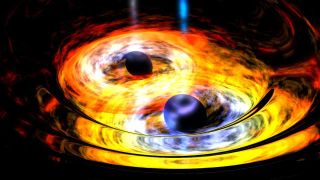 An artist's concept of two black holes circling each other before merging. For the first time in history, scientists have directly observed a black hole merger, using the Laser Interferometer Gravitational Wave Observatory (LIGO).
(Image: © NASA )

For the first time in history, scientists have physical proof that pairs of black holes will sometimes circle around each other, collide and mush together to form a single, bigger black hole.

This news of binary-pair detection is extremely significant for astrophysicists, but it was somewhat eclipsed by the simple fact that the Laser Interferometer Gravitational Wave Observatory (LIGO) had detected gravitational waves at all. It was the first instance of a direct detection of these ripples through space-time, and it marks the dawn of a new subfield of astronomy.

Vicky Kalogera, a black hole scientist at Northwestern University in Illinois and a member of the LIGO team, said it was appropriate that gravitational waves took center stage last week. But she took some time to talk to Space.com about why the pair of black holes that LIGO detected is particularly strange and exciting, too. [Stirred, Not Shaken - How Colliding Black Holes Make Waves]

There are two things that make the pair of black holes detected by LIGO interesting to astrophysicists like Kalogera.

One of the ways that black holes are thought to form in the universe is via star death. The hypothesis goes that when massive stars stop burning fuel, all their mass collapses down into a very small area, and creates an object with such a massive gravitational pull that not even light can escape. The gravity is so intense that the laws of physics, as humans understand them, break down.

Individual black holes have been observed in various ways, but until last week, there was no physical proof that black holes can exist as binary pairs that circle around each other and eventually collide.

"We see binary stars all the time," Kalogera told Space.com. It should follow that those star pairs should one day die and form black-hole pairs. And yet, "up until now, we had zero experimental evidence, even indirect, that binary black holes exist. … So, the significance of this discovery from an astrophysics point of view is that it confirms all the theoretical predictions that binary black holes exist."

Without a gravitational-wave detector like LIGO, scientists would never have been able to study binary black holes. Researchers can spot individual black holes in distant locations because material around those objects gets accelerated and radiates light.

But Kalogera said scientists don't expect to see any kind of light radiated from around two black holes spinning toward each other and colliding, because the dynamics of the system would be very chaotic, and not very conducive to material accumulating and staying nearby. So detecting them with light-based telescopes may be impossible.

The fact that the recently upgraded LIGO detector spotted a binary black hole merger so early in the instrument's observation period means there's a chance that scientists will have a lot of black hole data to study in the coming years.

Fat black holes and how they form

The second really interesting feature of the black hole duo is their mass.

"The 29 and 30-plus solar masses come as an unusual surprise. If you look at most binary stars in [the Milky Way] galaxy, given the composition of the stars, we don't expect black holes of this mass," Kalogera said. "The higher mass tells us that these binary black holes formed from a particular environment [with a] metallicity that is different than [the sun's] metallicity."

Metallicity refers to the fraction of the star that is not made up of hydrogen or helium, but instead consists of heavier elements.

A higher concentration of hydrogen and helium allows the star to retain more of its mass through its lifetime, Kalogera said. Stars continuously lose mass because of stellar wind, a flow of particles away from a star's atmosphere. But in the past seven or eight years, scientists have revised their theories to show that stellar winds are weaker than previously thought.

"If those winds are very strong, you end up with final masses that are very small and you don't form heavy black holes," Kalogera said. "Around in the late 2000s, estimates of how strong [solar] winds are were revised. … Astrophysicists realized from electromagnetic observations that the winds are weaker than we thought. So, if you now put weaker winds in your stellar models, your final masses are heavier, so you're getting these heavy black holes to form in your models. … By now, many groups have confirmed those predictions."

The detection by LIGO further corroborates those theories, but this is just the beginning. More observations of black hole binaries will help scientists refine their models even more.

One major question Kalogera said she hopes astrophysicists will eventually be able to answer is how black hole binaries form. There are two leading models, which she refers to as "vanilla" and "wacky."

Many stars in the universe live as binaries, because stars are born in clouds of gas and dust and these stellar nurseries typically have more than enough material to form multiple stars.

The "vanilla" description of binary black-hole formation starts with a happy, stable pair of normal stars, living their lives in relative peace. They grow up together, they get old, they both explode into supernovas, then collapse into black holes. After that, they stick together and eventually merge.

The "wacky" idea is a bit more chaotic.

"They're dancing, basically, in a swirl of stars, flying around, and sometimes, through recoils, [the stars] can shoot some of the other stars out of the cluster," Kalogera said.

So it could be that binary black holes form from stars that weren't born in the same litter, but were flung from their original homes. Or, these complicated interactions could also lead to scenarios in which multiple, newly formed black holes can move toward the center of a stellar group. There, some of them would be ejected while others remain, forming stable binaries only after becoming black holes.

Eventually, with a larger sample of binary black holes from LIGO, Kalegera said scientists may be able to discern which formation method dominates in the universe.

"We'll be able to tell whether wacky wins or the more vanilla [model]," she said.

Kalogera and the other members of the LIGO scientific collaboration published a paper in The Astrophysical Journal Letters that describes what the researchers have already learned about the newly discovered black hole pair, and how that fits with current theories.