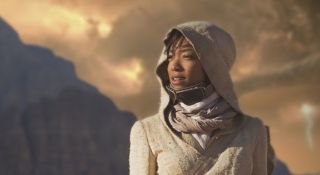 The first episode of "Star Trek: Discovery" airs tonight on CBS at 8:30 p.m. EDT/7:30 p.m. CDT. Immediately after the broadcast, the first and second episodes will be available on CBS All Access, the network's online streaming service. Subsequent episodes will be released each week exclusively on the streaming subscription service.

"Discovery" is the sixth live-action "Star Trek" television series. The original TV series, which kicked off the entire franchise, began airing 51 years ago. [How to Watch "Star Trek: Discovery"]

For many of the stars of the new show, putting on Starfleet uniforms and using transporters fulfilled childhood dreams of warping across the universe. Anthony Rapp, who plays Lt. Stamets on "Star Trek: Discovery" and is also known for his roles in "A Beautiful Mind" (2001) and "Rent" (2005), mentioned a whole list of cool nerd-out moments for him.

"Just putting on my uniform – A – [and] badge – B. And then, as I was getting my photoshoot, they handed me a communicator — that's C. And then, they hand me a phaser — that's D," he said in an interview with Space.com on the red carpet just before the premiere of "Star Trek: Discovery" in Los Angeles Tuesday (Sept. 19).

"Then, there was a scene early on — I think that's Episode 4 — where I had a communicator and a phaser in my hand at the same time," he added. "I opened the communicator, and I said, 'Energize!' to the communicator. That was, like, super nerd trippy for me."

"I mean, meeting Nichelle right now was pretty, pretty wild," Martin-Green said. "It was pretty out there; I had a moment for sure. I'm not going to top that."

While the "Star Trek" franchise often has long gaps between TV series — the last one went off the air in 2005 — the Trek universe remains strong because there are tight connections between the fans. Plus, the show is easily available in reruns and digital formats, and comic cons, occasional Hollywood movies, and fan sites (such as Memory Alpha) connect wannabe Starfleet officers.

It also means that they can argue over old, unsolvable problems, such as who is the best captain. That was also true of the new "Star Trek" cast and crew.

"I have to say [Kathryn] Janeway [was the best]," said Mary Chieffo, who plays Klingon Battle Deck Cmdr. L'Rell, referring to the captain of "Star Trek: Voyager" (1995-2001). "That's the feminist in me. But beyond that, I think that she's just a badass captain, and she gets things done.". [The Best "Star Trek" Captains from Worst to Best]

But most others debated between Capt. James T. Kirk (from the original series) and Capt. Jean-Luc Picard ("Star Trek: The Next Generation," which aired from 1987 to 1994).

"[Picard] always knows what the right answer is; he always is so fair; he always is so patient. Yet he knows exactly when to turn it on when he has to, and he can be severe," said Glenn Hetrick, a creature-creator and makeup artist for "Discovery."

"I mean, Kirk," countered James Frain, who plays the Vulcan Sarek in "Discovery." "That's like, 'Who's your favorite James Bond?', and if you don't say 'Sean Connery,' really? Come on."

"Sometimes it was Kirk, sometimes it was Picard, and it would sort of go back and forth. But in the end, in a cage match, I think Picard takes it," added composer Jeff Russo.

The ultimate word came from William Shatner himself, the actor who played Kirk. "My wife," he answered without hesitation when asked who is the best captain. "She is the captain of my life." [The Evolution of 'Star Trek' (Infographic)]

The legacy of "Star Trek"

When "Star Trek" debuted in the 1960s, the United States was in the middle of a Cold War with the Soviet Union and was just about to land humans on the moon. The series ran at a time of great political fear, but also great technological optimism. [7 Biggest Lessons We Learned from "Star Trek"]

Creator Gene Roddenberry famously created a crew that portrayed a more advanced time in the future; the crew of the original series had an Asian man, a black woman and a native Russian man who performed their duties practically without comment on their backgrounds or races.

Future iterations also pushed boundaries, such as by including a lot of aliens on the crew ("Star Trek: Deep Space Nine," 1993-1999) or having a crew led by a female captain ("Star Trek: Voyager"). "Star Trek: Discovery" will feature the first openly gay character on a Trek TV show, Lt. Stamets (played by Rapp).

"Every step we take forward as a species, we're hoping to aspire to the type of ideology and the paradigm that's so prevalent behind the 'Star Trek' universe," Hetrick said.

"It just captures people's imagination," added Rapp, "and then it's also this vision of the future in which humanity has gotten past most of its bugaboos about race and class and sexual orientation, and all of those things kind of settle, and it's just so we get to be our best selves."

Several people involved with the franchise also pointed out that "Star Trek" seems to be able to engage in whatever political and social conversations are taking place, and that some of the topics that Trek was addressing in the 1960s have continued into the 21st century. The franchise is also a shared experience between families, even after many decades.

"It's a show that is literally handed down, from grandparent to grandchild, brother to sister," said executive producer Aaron Harberts. "It's something that people really want to pass on."