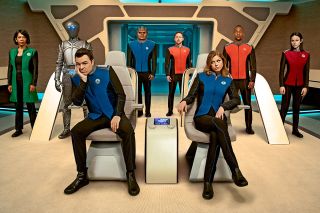 Warning: This review contains spoilers for the first episode of "The Orville."

"Star Trek" fans are used to being patient with a lackluster first episode, or even a lackluster first couple of seasons. There's a joke among "The Next Generation" devotees, for example, that the show is only worth watching after Riker grows a beard (during Season 2 — and believe us, it's a long drought before that).

So my expectations were muted about "Star Trek" spoof "The Orville," Seth MacFarlane's new show, whose first episode aired last night (Sept. 10). The first scene had a prominent sex joke, and the banter about penises and marriages gone bad went on for two-thirds of the episode. But then, late in "The Orville" came a flash of Captain Kirk-like brilliance that surprised me. Maybe it shouldn't have, however.

MacFarlane — who stars in "The Orville" and also serves as executive producer — is a student of space-opera history. His "Star Wars"-themed episodes of "Family Guy" exactly captured the optimism and spirit of the first three movies (though he did add a few fart jokes for the core "Family Guy" audience). But MacFarlane also takes space very seriously: He was executive producer of the rebooted documentary series "Cosmos" (starring Neil deGrasse Tyson). [Photos from 'Cosmos: A Spacetime Odyssey' TV Series (Gallery)]

First, a quick recap of the premiere of "The Orville." Ed Mercer (MacFarlane) is a potential starship captain whose career is derailed when he finds his wife, Kelly Grayson (Adrianne Palicki), sleeping with someone else. Now a year past the divorce, MacFarlane finally gets his long-awaited chance to command the USS Orville — but with caveats. Admiral Halsey (Victor Garber) warns Mercer that he must get along with the first officer, who happens to be Grayson.

The crew — joking about Mercer's failed marriage and what you can and cannot eat while on duty — then heads over to the space station Epsilon, a location that at first appears boring because there are no bars and no strip clubs, as the crew discovers during a scan. However, chief scientist Dr. Aronov (Brian George, best known as Babu from "Seinfeld) has a new experiment-turned-weapon: a quantum bubble that can accelerate time, which also means it can age and kill people in seconds. Of course, the show's Klingon-esque baddies, called the Krill, want the weapon, too.

"The Orville" is billed as a "Star Trek" spoof, but spoofing was unfortunately sparse. There were the usual dramatic shots of starships, the joy of going warp speed across the universe, the very Starfleet-like uniforms — all familiar tropes of an episode, and all very well executed. But the jokes sounded like an episode of "Family Guy," if the characters wore uniforms. "Permission to go pee" was one of the cleaner ones.

The literal bathroom humor wore thin very quickly, but in the last 10 minutes there were two key sequences that showed MacFarlane's chops. The first took place during a typical "alien threatens to blow up the ship" sequence, when The Orville's management confronted the Krill commander onscreen. To "buy a few minutes," as Grayson said sarcastically, she started asking the commander about how he balances his home and family life.

"A marriage is work," the commander acknowledges, suddenly and humorously turning reasonable for a moment.

But when asked if a neglected wife could reasonably seek comfort in another's arms, the Krill commander kills the mood by saying "No, that would be selfish," and proceeds to fire again on the ship — prompting MacFarlane's next interesting script maneuver. [The Evolution of 'Star Trek' (Infographic)]

The Orville crew agrees to hand over the superweapon, but they also place a redwood seed on top before sending it over. After the Krill start the activation code, a tree literally begins to grow and age rapidly in the middle of the Krill's ship, completely destroying the vessel. That's definitely a Kirk-worthy trick, but it's too bad the only laugh-out-loud joke came just minutes before the episode's end.

As a Trekkie, I also spotted a potential plot hole. On Epsilon, during a Krill attack, crewmembers of The Orville run through the station and then over to a small vessel to get back to their starship. This scene seemed klutzy and long-winded, because "Star Trek" crewmembers usually beam up in an instant when danger strikes. Where was the transporter? I reasoned that it was perhaps because The Orville itself was under attack and shields were up, preventing the beam-up, but I didn't see a clear explanation. (Trekkies, please weigh in on the comments.)

The bottom line is, "The Orville" needs to use more jokes that are clever and fewer of the sexual variety, to truly qualify for "Star Trek"-esque humor. Let's hope MacFarlane had time to review the infamous whale rescue movie, "Star Trek IV: The Voyage Home" (1986), to get some tips on how to use Vulcan logic, pop culture and an awesome science-fiction series to really get audiences laughing.