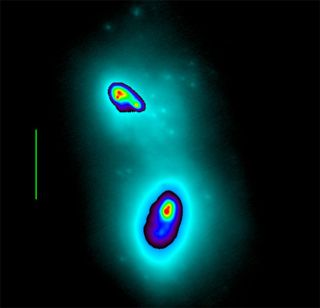 This image of NGC 6240, taken in infrared light using the Keck II Telescope, is colored to the nucleus of each of the two galaxies. The green vertical line represents 1600 light years.
(Image: © C. Max, G. Canalizo, W.H. de Vries)

Scientists have pinpointed the precise locations of a pair of supermassive black holes at the centers of two colliding galaxies 300 million light-years away.

Infrared images made by the Keck II telescope in Hawaii reveal the two black holes at the center of the galaxy merger known as NGC 6240 are each surrounded by a rotating disk of stars and cloudy stellar nurseries.

The new images are detailed in Science Express, an online publication of the journal Science.

Scientists had previously observed NGC 6240 in a piecemeal fashion, using different wavelengths of light. Images captured by the Hubble Space Telescope showed the outer parts of the colliding galaxies in visible light, and revealed long tidal tails made of orphaned stars, gas, and dust.

Subsequent X-ray observations by NASA’s Chandra X-ray Observatory revealed the presence of two supermassive black holes at the center of each galaxy, and the Very Long Baseline Array spotted two radio sources in the galaxies’ central regions. The problem was combining all of the images to form a single coherent picture.

“You have all these different telescopes and they look at the same piece of sky but see wildly different things,” said study team member Willem de Vries of the University of California, Davis.

Keck II uses a relatively new type of imaging called adaptive optics, which uses an artificial laser-generated "guide star" as a reference and a rapidly deforming mirror to correct image distortions from the Earth's atmosphere in real time.

The Keck II images were of such high spatial resolution that scientists could identify features in NGC 6240 captured by the other telescopes in the optical, X-ray and radio wavelengths.

Like a Rosetta Stone, the Keck II images allowed scientists for the first time to calibrate the different images of NGC 6420.

“Now we can really see it all—the hot dust in the infrared, the stars in the visible and infrared, and the X-rays and radio emissions from right around the black holes,” said study leader Claire Max at the University of California, Santa Cruz.

Scientists think galactic mergers are one of the primary ways galaxies form. Like heated wax in a lava lamp, two small galaxies can come together to form one larger one, or a blob of gas and stars might pinch off during a particularly messy galactic smash-up and, over cosmic time, the result evolves into a diminutive dwarf galaxy.

Our own Milky Way galaxy is expected to collide and merge with its neighbor Andromeda in a few billion years to form a large elliptical galaxy some scientists jokingly call “Milkomeda” or “Andromeda Way.” When that occurs, a black hole merger similar to that of NGC 6420 could occur.

“We have a wimpier black hole than the two galaxies [in NGC 6420], but we have a black hole and we believe Andromeda does too,” Max told SPACE.com.

When galaxies merge, the behemoth black holes at their centers merge and grow as well. Recent studies have shown that supermassive black holes help determine many properties of their host galaxies. Scientists say this idea, sometimes called “co-evolution,” is among the most surprising realizations to emerge from astronomy in recent years.

“The gravitational influence of the black hole is actually limited to a relatively small region right around it, so how can it affect the rest of the galaxy?” Max said. “But if the black hole and the galaxy around it evolved together through the same sequence of merger events, that would explain the correlations.”

Scientists estimate the two black holes in NGC 6240 will spiral into each other and merge in 10 million to 100 million years.