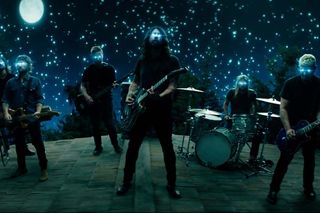 The Foo Fighters' latest song draws from the cosmos for inspiration, and the band's new mobile constellation viewer brings the stars directly to its listeners.

The fourth track on Foo Fighters' upcoming album "Concrete and Gold" is called "The Sky Is a Neigborhood," and it draws inspiration from skywatching, according to a statement from the band.

The song was written by the band's guitarist and lead vocalist Dave Grohl: "One night I was lying out looking up at stars," Grohl said in the statement. "Just imagining all of these stars as places that have life on them as well, and I decided that the sky is a neighborhood, that we need to keep our s--- together in order to survive in this universe full of life."

Grohl also directed the video for the new song, which stars his two daughters and has the band performing atop a roof against a background of stars. It digs into extraterrestrial territory as well, as special effects light up band members' eyes.

The alien aspects draw their roots from dreams Grohl had of UFOs, according to an interview he did with Rolling Stone.

He added that an integral part of the song's development was Neil deGrasse Tyson's answer to the Time.com question "What is the most astounding fact you can share with us about the universe?"

The Foo Fighters developed a constellation viewer for iPhone or Android devices to share their skywatching fascination. It will "configure a realistic constellation map in the viewer's 3D sphere, then let it identify the constellations in your night sky — all while tiny Foo Fighters soundtrack your explorations at the bottom of the screen," according to the band.

"Concrete and Gold" is available for pre-order on Amazon and wherever else records are sold. It is set to be released on Sept. 15, 2017, the same day that NASA's Cassini spacecraft takes its mission-ending "Grand Finale" dive into Saturn's upper atmosphere.