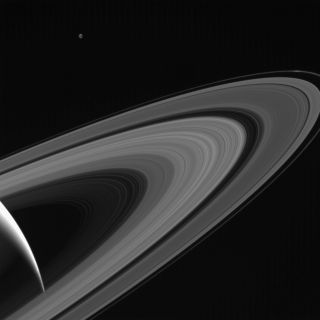 The icy moon Tethys sits above Saturn's rings in this photo captured on May 13, 2017, by NASA's Cassini spacecraft.
(Image: © NASA/JPL-Caltech/Space Science Institute)

The night side of Tethys is lit up by "Saturnshine" — sunlight reflected off its parent planet — in the image. But this Saturnshine isn't quite as powerful as the photo makes it seem.

"Tethys was brightened by a factor of two in this image to increase its visibility," NASA officials wrote in an image description. "A sliver of the moon's sunlit northern hemisphere is seen at top. A bright wedge of Saturn's sunlit side is seen at lower left."

At 660 miles (1,062 km) across, Tethys is the fifth-largest moon of Saturn. (The only bigger ones are Titan, Rhea, Iapetus and Dione.) Tethys has some pretty dramatic features that aren't visible in this photo — a deep canyon that snakes across three-fourths of its surface, for example, and a crater called Odysseus that's 250 miles (400 km) wide.

Cassini has been capturing stunning images like this one since arriving in orbit around Saturn in July 2004. But the probe's work is nearly done: Cassini is in the "Grand Finale" phase of its mission, which will culminate with an intentional death dive into Saturn's thick atmosphere on Sept. 15.

This maneuver is designed to ensure that Cassini doesn't contaminate Titan or fellow Saturn satellite Enceladus with microbes from Earth. (Astrobiologists think Titan and Enceladus may be capable of supporting life.)

The $3.2 billion Cassini-Huygens mission is a collaboration involving NASA, the European Space Agency and the Italian Space Agency. Huygens was a piggyback lander that traveled with the Cassini mothership and touched down on Titan in January 2005.