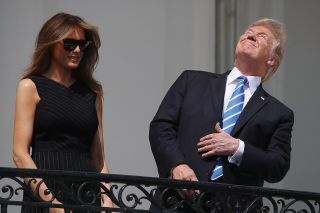 President Trump looks at the sun without protective gear during the solar eclipse of Aug. 21, 2017.
(Image: © Mark Wilson/Getty)

Like millions of other Americans, President Donald Trump and his family got a peek at today's historic solar eclipse. This afternoon, the president, the first lady and their son Barron stood on a White House balcony, put on their eclipse glasses and stared up at the sky. However, at one point, Trump was seen looking upward, without protection.

According to Wall Street Journal reporter Ted Mann, one of the president's aides yelled "Don't look!" in an attempt to protect Trump's vision.

Staring directly at the sun, without the powerful ultraviolet protection afforded by eclipse glasses, can cause solar retinopathy, a condition that can lead to vision problems or even blindness. On normal days, people get eye pain when they look directly at the sun, so they don't stare very long. However, during an eclipse, you won't necessarily experience pain, but you can still get serious eye damage. (You can safely look at the sun with the naked eye during the brief period of total eclipse. But Washington, D.C., was outside the path of totality for today's eclipse; observers there saw only a partial eclipse.)

There's no word from the White House about whether Trump suffered eye damage, but he appeared to look up for only a brief moment. If you plan to look at the sun during an eclipse or at any other time, make sure you put on a pair of protective glasses or use a pinhole projector.