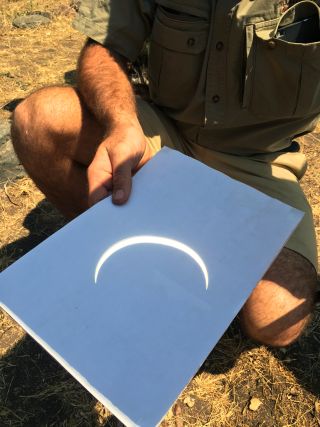 An image of the sun during an eclipse can be safely projected down onto a piece of paper using a pair of binoculars or a telescope (as in this image).
(Image: © Ryan Milligan/NASA)

If you won't have eclipse glasses in time for the total solar eclipse that will cross the United States on Aug. 21, here are your options for getting them in a hurry or viewing the eclipse another way.

The fastest way to grab eclipse glasses may involve visiting a local store, according to Stephen Ramsden, head of an outreach program called the Charlie Bates Solar Astronomy Project. Many online orders have been delayed, and a last-minute recall by Amazon has created a hurdle for some hopeful eclipse viewers. [How to Tell If Your Eclipse Glasses Are Unsafe (and What to Do About It)]

Several retail chains are selling eclipse glasses and handheld viewers that meet the ISO requirements for safety. According to the American Astronomical Society's (AAS) list of approved vendors, some locations of the following stores carry the glasses:

According to Ramsden, that may be your only option to purchase glasses at this stage.

"If you waited this long for glasses, your only hope, possibly, is your local retail establishment," he told Space.com.

In the days leading up to the Great American Solar Eclipse, a number of organizations will open their doors for eclipse-related events. Most will provide eclipse glasses to safely view the event. Contact your local library, museum or observatory to see what it is planning and whether it will provide eclipse glasses. In addition to finding a way to protect your eyes, you might enjoy the organization's program.

If you can't find eclipse glasses and you've given up on finding them, consider an eclipse-viewing alternative. One of the most widely known options is to build a pinhole projector, which requires only a small shoe-box-size box and a few household items. [Build Your Own Solar Eclipse Viewer]

You can also turn a pair of binoculars into a projector to watch the eclipse safely. That doesn't mean directly looking through the binoculars at the sun, which is definitely unsafe. Instead, combine the binoculars with a tripod (or a stack of books), some duct tape and two pieces of white cardboard to create your own safe solar eclipse viewer. See our video on how to do this here.

Hundreds of millions of people will be in range to observe the Aug. 21 event as either a total or partial eclipse, and if they don't use safe viewing methods, the results can be literally blinding. Light from the sun can burn your eyeballs, resulting in permanent damage. So if you want to look directly at the sun, it's critical to use glasses with proper ISO certification, like those from vendors on the AAS list, Ramsden said.

But if you can't find eclipse glasses, and you don't want to make your own viewing equipment, you still won't be out of luck, Ramsden said.

"It's not a time to panic," he said. Based on his experience, Ramsden added, if you visit a city with an eclipse viewing party, people will be more than willing to share.

"There will be hundreds of glasses floating around," he said. "Just go to the event, and share them with someone else."