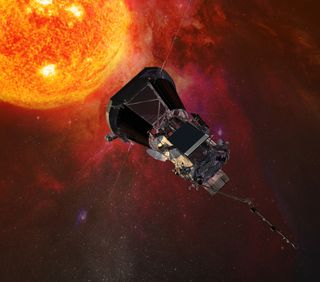 Paul Sutter is an astrophysicist at The Ohio State University and the chief scientist at COSI Science Center. Sutter leads science-themed tours around the world at AstroTouring.com.

By now, with so little time left until a total solar eclipse crosses the U.S. from coast to coast on Monday (Aug. 21), skywatchers planning to attend the event should understand that it's dangerous to look directly at the sun with the unaided eye, even if it's almost entirely covered by the moon. Seriously, don't do it.

The intense radiation emitted by the sun at multiple wavelengths, from the infrared through the ultraviolet, heats and warms our little world, but even at a distance of 93 million miles (149 million kilometers) and through our thick atmosphere, it can damage our skin and eyes. And occasionally make it possible to cook eggs on the sidewalk, if you're the adventurous sort.

So, NASA is going to send a spacecraft closer than ever before, and hope to capture useful data before the probe…well, melts.

The Parker Solar Probe was named after astrophysicist Eugene Parker (and let me interrupt myself and take this opportunity to castigate NASA for missing the golden opportunity to christen it the Icarus). The mission is set to launch in the summer of 2018. The craft won't take long to start taking dips near the sun, coming within 3.7 million miles (6 million km) of the surface. That sounds like a pretty large distance, which might lead some people to think the probe isn't getting that close to the sun — but the spacecraft will experience the sun's inferno at a scale 520 times greater than us here on Earth.

That mission design will continuously dip the probe in and out of the danger zone, coming seven times closer to the sun than any spacecraft before it. That puts poor Parker squarely within the sun's corona, the poorly understood wispy outer layer of our star. The hope is that this Evel Knievel-inspired plan will help us unlock the mysteries of that outer layer.

How does the corona reach temperatures exceeding 3 million degrees Fahrenheit (6 million Celsius), despite extending so far from the relatively cool surface? How do charged particles emanating from the sun get accelerated to near-light speed before spilling out into the system as a continuous solar wind? How do magnetic fields twist and tangle to transfer such tremendous energies?

We currently just have fuzzy half-answers to the above questions, and it's only by taking direct measurements as close to the furnace as possible that we can make more progress in answering them.

If you're lucky enough to see totality during the upcoming eclipse, you'll get to witness the sun's corona for yourself. And starting next year, plucky little Parker will be soon swimming in that sweltering soup, bravely collecting data before it, too, succumbs to the flames.