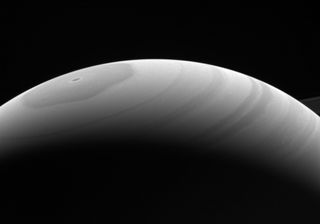 Saturn emerges from the shadows to bathe in sunlight in a new view of the planet's infrequent summer solstice.

The Cassini spacecraft captured the beautiful photo of the ringed planet in April 2017. The image of Saturn's northern hemisphere includes lines across its cloudy atmosphere and a view of the hexagonal north pole outlined clearly. Cassini captured the sight when the spacecraft was 17 degrees above the ring plane and about 733,000 miles (1.2 million kilometers) above Saturn's surface.

Saturn experiences seasons, and Cassini has an "unparalleled opportunity" to observe how the giant belted planet responds to changes as it receives continuous light on its northern side, NASA officials said in a statement. A Saturn solstice occurs about once every 15 Earth years, and as Saturn approaches solstice at its north pole, the days in that hemisphere grow longer than at any other point along its roughly 30-Earth-year orbit. [More Photos: Saturn's Weird Hexagon Storms]

Saturn's northern hemisphere continues to receive most of the sun's light until the planet's equinox, when the sun shines equally over both halves of Saturn. After the photograph was taken, Saturn continued to receive more sunlight as Saturn's summer solstice officially arrived a month later, on May 24. [Cassini Spots 'Ghostly Curtains of Light' Near Saturn's South Pole]

One seasonal change is a shift in color in the northern pole region. A few years ago, Cassini captured images with its wide-angle camera to show astronomers a distinct change in hue: from a darker tinge in November 2012 to a creamy tint in September 2016.

The spacecraft is operated by a collaborative mission of NASA, the European Space Agency and the Italian Space Agency. On Sept. 15, 2017, the spacecraft will complete a final dive into Saturn's atmosphere over the course of several orbits, to prevent the low-fueled spacecraft from spreading microbes to any of Saturn's moons.