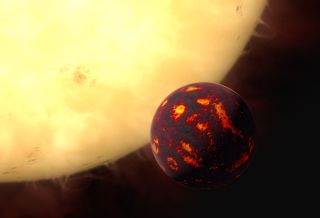 55 Cancri e is a super-Earth — about twice our planet's size — that zooms around its star in 18 days. It has a surface temperature of nearly 4,900 degrees Fahrenheit (2,700 degrees Celsius). For a while it was dubbed the "diamond planet" because scientists suggested that it was composed of diamonds and graphite. While that theory is not as popular today, the planet still remains an interesting object of study due to its high density and its very close proximity to its parent star. Several follow-up studies have yielded more insights about its super-hot surface, as well as its atmosphere.

Astronomers discovered the planet in 2004 after looking at the spectrum of its parent star, 55 Cancri A, one of two stars in a binary system about 40 light-years from Earth in the constellation Cancer. There are at least four other planets in the same system, mostly discovered before 55 Cancri e. The team (led by the University of Texas at Austin's Barbara McArthur) discovered subtle tugs on the parent star that could be explained by the presence of yet another planet. While the planet's existence was challenged by a second research team in 2005, a separate team in 2006 confirmed it.

Astronomers initially thought 55 Cancri e (abbreviated 55 Cnc e) had an orbital period of 2.8 days, but measurements in 2011 showed that the planet is much closer to its parent star. Observations with Canada's MOST (Microvariability & Oscillations of STars) space telescope demonstrated an orbital period of less than 18 hours. Researchers estimated the surface temperature of 55 Cancri e could be as high as 4,892 F (2,700 C).

Follow-up observations with the Spitzer Space Telescope in 2012 showed that 55 Cancri e is much weirder than anticipated. While original estimates said the planet was dense and rocky, Spitzer suggested the planet includes a healthy proportion of light elements and compounds (such as water). However, the planet's high surface temperatures contribute to a "supercritical" fluid state, the researchers said, meaning that the gases are in a liquid-like state.

'Diamond planet' and losing the sparkle

A model of the planet's interior in 2012 suggested that 55 Cancri e is made up of carbon (principally as diamonds and graphite), as well as iron, silicon carbide and possible silicates. Lead researcher Nikku Madhusudhan, of Yale University, said that their model was different from previous ones because unlike previous teams, they did not base their assumptions upon Earth's chemical composition.

However, this idea was challenged in 2013 by University of Arizona astronomy graduate student Johanna Teske. In a statement at the time, she said the parent star of 55 Cancri e is both cooler than the sun and has more metals. She also said the 2012 study did not properly analyze the single oxygen line in the star's spectrum, leading to possible errors. Her research instead found that the host star of 55 Cancri e has 25 percent more oxygen than carbon.

Ongoing studies of the planet are trying to figure out more about its weird nature, though. Researchers observed the planet using the Hubble Space Telescope and Spitzer Space Telescope, with results published between 2013 and 2016. Some of the theories put forward about its surface include volcanoes or runny lava, which would help explain the wide temperature swings between day and night. Meanwhile, analysis of its atmosphere suggests the planet's envelope is mostly made up of hydrogen and helium — more gas-giant like than Earth like. [Video: Super-Earth Exoplanet’s Atmosphere Characterized for 1st Time]