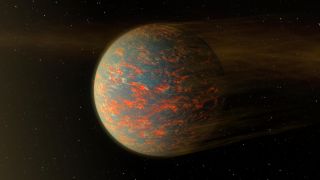 The first super-Earth planet to get its photo taken may be superweird and superhot, and perhaps have super-runny lava in spots on its surface, researchers said.

Astronomers investigated the alien planet 55 Cancri e, the innermost of five known planets orbiting the star 55 Cancri, located about 41 light-years from Earth. This exoplanet is a super-Earth, a rocky world nearly twice Earth's width and eight times its mass. It's the first super-Earth from which astronomers have detected light.

55 Cancri e circles its star about 25 times closer than Mercury does the sun. As a result, the planet whips fully around its star about every 18 hours, while Earth takes a year to complete an orbit. [Oozing Super-Earth: Images of Alien Planet 55 Cancri e]

Previous studies of 55 Cancri e suggested it might possess strange properties. Some work suggested the exoplanet was covered with oozing "supercritical fluids" — high-pressure, liquidlike, gas-like substances — while other research suggested the world was made largely of diamond.

To help solve the mysteries of 55 Cancri e, astronomers used NASA's Spitzer Space Telescope to monitor infrared emissions from the exoplanet for 75 hours total during the summer of 2013. The resulting thermal map revealed a strong difference in temperature between the planet's dayside and nightside.

55 Cancri e is tidally locked, meaning it always keeps the same face pointed at its star. On the dayside, temperatures on 55 Cancri e can reach about 4,400 degrees Fahrenheit (2,427 degrees Celsius). On the nightside, temperatures can dip to about 2,025 degrees F (1,107 degrees C). The nightside may be kept warm by heat conducting through the rock from the dayside, said study lead author Brice-Olivier Demory, an astrophysicist at the Cavendish Laboratory in Cambridge, England.

The nightside's relatively cooler temperatures suggest that 55 Cancri e does not possess a thick atmosphere that could carry heat from the dayside to the night side, Demory said. It also suggests this planet is not covered with a large envelope of water, ruling out the possibility that supercritical fluids envelop 55 Cancri e, Demory added.

About halfway between the dayside and the nightside, the researchers discovered that 55 Cancri e possesses a hotspot. They suggest this hotspot might be due to lava flows, and because the planet is hot, this lava may flow better than it does on Earth, behaving more like water does at room temperature and less like solid rock.

A potential alternative explanation for this hotspot is that 55 Cancri e may possess an atmosphere only on the dayside of the planet; on the night side, the atmosphere would freeze out, Demory said. It remains uncertain whether such an atmosphere, if it exists, would convey enough heat to explain this hotspot, he said.

"We are far from having a comprehensive picture of this exoplanet," Demory told Space.com. "It is likely that Hubble's successor, the James Webb Space Telescope, will help in our understanding of this surprising world." The scientists detailed their findings online March 30 in the journal Nature.