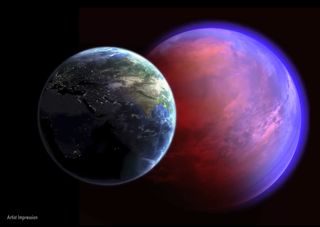 An artist's impression of the alien planet 55 Cancri e, with Earth in the foreground for comparison.
(Image: © NASA)

A new look at an alien planet that orbits extremely close to its parent star suggests that the rocky world might not be a scorching hot wasteland, as was thought. In fact, the planet may actually be stranger and wetter than astronomers ever imagined.

The exotic planet 55 Cancri e is a relatively close alien planet, just 40 light-years away from Earth in the constellation Cancer (The Crab).

The super-dense world circles so close to its host star that it takes a mere 18 hours to complete one orbital lap. Using our solar system for comparison, 55 Cancri e is 26 times closer to its parent star than Mercury is to the sun, according to NASA officials.

Because of its tight orbit around its stellar host, 55 Cancri e was long thought to harbor surface temperatures as high as 4,800 degrees Fahrenheit (about 2,700 degrees Celsius), researchers have said.

But new observations from NASA's infrared Spitzer Space Telescope have astronomers revisiting the exoplanet, armed with intriguing clues that 55 Cancri e could be a wetter and weirder place than   thought. [Oozing Super-Earth: Images of Alien Planet 55 Cancri e ]

Using Spitzer, researchers measured the faint dip in brightness caused by 55 Cancri e passing in front of its star. Since these so-called transits occur every 18 hours, scientists have plenty of opportunities to collect enough data to help them estimate the size, volume and density of the alien planet, agency officials said.

Based on these results, the researchers calculated that 55 Cancri e has a mass 7.8 times that of Earth, and a width just over twice that of our planet.

"Those properties place 55 Cancri e in the "super-Earth" class of exoplanets, a few dozen of which have been found," wrote astronomer Tony Phillips in a post on Science@NASA. "Only a handful of known super-Earths, however, cross the face of their stars as viewed from our vantage point in the cosmos, so 55 Cancri e is better understood than most."

55 Cancri e is part of a multiplanet system that was first detected in 1997. Five planets circle the host star, and 55 Cancri e was discovered in 2004. Originally, estimates of the planet's size and mass indicated that it was an ultra-dense rocky world, but Spitzer's observations suggest that about a fifth of the planet's mass must be made up of light elements and compounds, including water, scientists said.

Since 55 Cancri e experiences such extreme temperatures and high pressure, these elements and compounds likely exist in what is known as a "supercritical" fluid state, the researchers said.

Supercritical fluids can best be imagined as liquid-like gases in high pressure and temperature conditions. According to the scientists, water becomes supercritical in some steam turbines, and supercritical carbon dioxide is used to scrub caffeine from coffee beans. Similarly, the liquid fuel used to power some rockets becomes supercritical as it blasts from the tail of a spaceship, the researchers said.

If this is the case on 55 Cancri e, supercritical fluids could be seeping out from the planet's rocks. And, while conditions on the strange world are not suitable to host life, 55 Cancri e does give exoplanet hunters an interesting example to study, Phillips added.