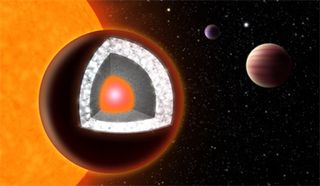 Planet 55 Cancri e was believed to be the first known planet to consist largely of diamond, due in part to the high carbon-to-oxygen ratio of its host star. New research challenges that precious picture.
(Image: © Haven Giguere)

An alien planet thought to be made largely of diamond may be less than glittering inside, new research shows.

The notion of a diamond planet hinges on an abundance of carbon. A few years ago, scientists reported that the star at the center of a solar system 40 light-years from our own had a carbon-to-oxygen ratio greater than one.

"This observation helped motivate a paper last year about the innermost planet of the system, the 'super-Earth' 55 Cancri e," University of Arizona astronomy graduate student Johanna Teske, explained in a statement. [See Images of the Strangest Alien Planets]

Planet 55 Cancri e is what's known as a super-Earth because it is likely a rocky world orbiting a sun-like star, but it has a radius twice as large as that of our own planet, and a mass eight times greater. The hot planet also races around its star at such a close distance that one year lasts just 18 hours.

Drawing on indirect observations of the planet, researchers of the 2012 study suggested its interior contained more carbon than oxygen. But in a new analysis, Teske and colleagues found that the host star doesn't appear as carbon-rich as previously thought, which might dash hopes for a diamond-packed 55 Cancri e.

Instead of just using one measure for the distant star's chemical signatures, Teske's group averaged different indicators of chemical abundance that were not considered previously.

"We find that because this particular host star is cooler than our Sun and more metal-rich, the single oxygen line analyzed in the previous study to determine the star's oxygen abundance is more prone to error,"   Teske explained. "Averaging all of these measurements together gives us a more complete picture of the oxygen abundance in the star."

The researchers found that the host star may actually contain nearly 25 percent more oxygen than carbon. That's about halfway between the carbon ratio of our sun and the ratio suggested by the previous study.

Teske also explained that the compositions of planets and stars don't always match; the makeup of a planet also seems to depend on planet-forming processes that are not fully understood, she said.

"Depending on where 55 Cancri e formed in the protoplanetary disk, its carbon-to-oxygen ratio could differ from that of the host star," Teske said in a statement. “It could be higher or lower. But based on what we know at this point, 55 Cancri e is more of a 'diamond in the rough.'"