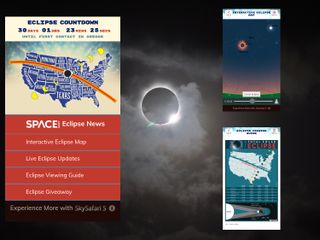 The free Eclipse Safari app for iOS and Android is the perfect tool for preparing for and experiencing the Great American Solar Eclipse on Aug. 21, 2017. Along with plenty of eclipse science information, it features interactive maps for planning your viewing location, tools for simulating your view of the eclipse and up-to-the-minute eclipse news, including NASA's live video stream during the eclipse and Space.com's news and Twitter feeds.
(Image: © SkySafari App/NASA)

The Great American Solar Eclipse is only a month away! The last time a total solar eclipse crossed from one coast to the other of the continental United States was June 8, 1918. With so many North Americans within driving distance, this event promises to be one of the most watched eclipses in history. And just in time to help you plan for it and learn all about solar eclipses and related news, Space.com and Simulation Curriculum have released the free Eclipse Safari App for iOS and Android. In this edition of Mobile Astronomy, we'll delve into the features of the app and highlight some ways it can enhance your solar eclipse experience on Monday, Aug. 21, 2017.

Once during every monthly orbit, the moon crosses between the sun and the Earth. Earth's natural satellite usually passes above or below the sun, because the moon's orbit is tilted about 5 degrees with respect to the Earth-sun orbital plane. Approximately every 18 months, however, the geometry lines up such that the shadow cast by the moon lands on the Earth and races across the planet at more than 1,000 mph (1600 km/h), creating a solar eclipse for observers lucky enough to be located within the shadow's track, which is only about 70 miles (115 km) wide!

These eclipses happen due to a lucky coincidence: Despite the vast difference in their diameters, nearby moon and the distant sun have the same the apparent size when viewed from the Earth's surface. This allow the moon to completely cover the sun's disk for a few minutes before moving off again. This effect, called a total eclipse, or totality, is visible only along the narrow path of the eclipse. [The Best ISO-Certified Gear to See the 2017 Solar Eclipse]

Meanwhile, the sky darkens and the air cools down. Birds fly to their roosts. Some of the brighter stars and planets will appear, dragging your attention away from the spectacle. But focus on the sun — you can see stars and planets anytime. During totality, the sun's extended corona becomes visible as a dancing, white halo extending many degrees away from the star. Solar prominences, material that is lifted away from the sun's photosphere, appear as orange or pink festoons distributed here and there around the moon's disk. Seconds before and after the moon covers the sun, bright flashes of sunlight sneak past mountain valleys around the moon's disk like sparkling diamonds set in a celestial ring.

For about an hour on each side of totality, a partial eclipse is visible — commencing when the moon first takes a "bite out of the sun" and ending when the moon completely moves off the sun's disk a few hours later. The Eclipse Safari app provides all the times for the partial and total portions of the eclipse event (more on this later).

Even a very short distance outside of the path of totality, part of the sun will remain visible at all times, yielding a partial eclipse and hiding the special features noted above. As one travels farther north and south from the track, less and less of the sun is covered, until the limit is reached where no eclipse occurs at all. Below, I'll discuss the areas where the full and partial eclipse are visible.

Counting down to the eclipse

The main page for the Eclipse Safari app presents a countdown clock measuring the time — to the second — until the total eclipse makes landfall on the west coast of Oregon. Once the eclipse begins, the clock will indicate which state the shadow is in and the time until maximum eclipse for you, whether or not you are in the path of totality.

While you wait for the big moment to arrive on Aug. 21, there's plenty to explore in the app. The first tab opens a page of Eclipse News from Space.com. Here, you'll find eclipse and related stories from Space.com, sorted with the newest on top. The content refreshes as new articles are posted online, so check it regularly.

The app's Live Eclipse Updates tab displays the Twitter feed from Space.com. This will include reposts from the global distributed network of scientists and space organizations that @Spacedotcom follows.

On eclipse day, the app will also carry NASA's live stream of the event, so you can see video of totality from multiple locations. Experts will explain the interesting science behind the eclipse, and broadcasts from all over will let you see the total eclipse again and again as the moon's shadow races across the U.S. and beyond. The sun is dynamic; in each case, the appearance of the solar prominences and corona should be different.

Note that the live content in the app will require a connection to the internet via your carrier's data plan.

All about viewing eclipses

The Eclipse Viewing Guide tab is loaded with information about August's eclipse and much more. First up, there are infographics showing how eclipses work and explanations about what you'll see. The eclipse occurs at different times in each state, so the app includes a map and schedule for major cities along the track.

It's never safe to look at the sun without proper eye protection. Only during the rare minutes when the moon completely hides the sun can filters be removed from eyes (and cameras).

The Eclipse Viewing Guide section includes suggestions for safely observing the partial phases of the eclipse, including how to pick eclipse glasses and telescope filters meeting international standards, as well as methods to project an image of the sun using simple pinholes. The latter method allows many people to view the sun at the same time, and there are lots of images of the technique being used.

Finally, the app provides advice for picking a site to view the eclipse and discusses how to get to that busy part of the country and what to bring. The section concludes with a roundup of some interesting historical eclipses.

The path of totality for the Great American Solar Eclipse passes through Oregon, Idaho, Wyoming, Nebraska, Missouri, Tennessee and South Carolina, as well as corners of Illinois, Kansas, Kentucky, Georgia and North Carolina. The partial eclipse will be visible throughout the entirety of North America, as well as in northern South America. The Eclipse Safari app includes an Interactive Eclipse Map that will tell you whether you will see the total eclipse from any location, indicating how much of the sun will be eclipsed in areas of partial eclipse.

When you enter the map screen, you'll be presented with a dynamic view of the U.S. that shows the eclipse track, and a dropped pin tied to your device's location. The app displays the percentage of the sun that will be eclipsed at this initial location and provides the local times for start and end of the partial eclipse. For locations that will not observe totality, it will also indicate the time when maximum eclipse occurs. For locations inside the eclipse track, the app provides the times for start of totality, maximum eclipse and end of totality. [Total Solar Eclipse 2017: When, Where and How to See It (Safely)]

For each of the times noted above, a link opens a simulated representation of the eclipse at that location and time, showing the sun, moon and surrounding sky. You can pan and zoom the image and operate a time slider to see how the eclipse progresses over time at that location. This feature is especially useful for seeing which part of the sky the eclipse will occur in, both at totality and during the surrounding partial-eclipse hours — information critical for setting up a camera or a tracking-telescope mount. You don't want the best moments to be hidden by a tree, building or distant hill!

The simulated sky map also includes major stars and planets. Some of these may become visible during totality. In a future edition of Mobile Astronomy, we'll cover all the objects to look for during the eclipse.

As I mentioned above, the total eclipse will be visible only inside the narrow eclipse track. If you live near the path, it's especially important that you check your location and move if need be. The map can be panned and zoomed right down to individual street level. Then you can press and hold the map to drop a pin and review the percentage the sun will be eclipsed and the times.

The app is also perfect for planning your trip to see the total eclipse. Perhaps you have a relative who lives along the track or a can find space at a motel or campground at this late date. You can quickly check the suitability of any location.

Other nice features of this page include the ability to search map locations, re-center on your default location with a single tap and reset the simulated sky display using a Center Eclipse icon.

Remember that roads will probably be loaded with cars on Aug. 21, so don't leave your driving to the last minute. Check the weather forecast often to ensure that you'll have sunny skies. The app's map will show you major roadways and alternative routes should you need to relocate on eclipse day.

In honor of the Great American Solar Eclipse, the Eclipse Safari app includes a page where you can enter to win some terrific eclipse-related prizes from Celestron, including a solar telescope, solar binoculars and eclipse-observing kits. There are also copies of the SkySafari 5 app. Good luck!

In upcoming Mobile Astronomy columns, we'll cover in depth how to plan your eclipse trip, what to look for during the event and more. In the meantime, keep looking up!

Editor's note: Chris Vaughan is an astronomy public outreach and education specialist at AstroGeo, a member of the Royal Astronomical Society of Canada and an operator of the historic 74-inch (1.88 meters) David Dunlap Observatory telescope. You can reach him via email, and follow him on Twitter @astrogeoguy, as well as on Facebook and Tumblr.