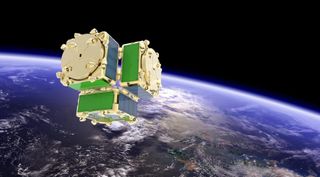 DARPA wants to launch its EXCITE spacecraft with experimental 'satlets' from NovaWurks on an Indian PSLV rocket.
(Image: © NovaWurks)

WASHINGTON — Citing delays with its original launch on a SpaceX Falcon 9 rocket, the U.S. Defense Advanced Research Projects Agency is trying to launch an experimental small satellite mission on a Polar Satellite Launch Vehicle from India.

DARPA had originally planned to launch a mission called EXCITE, or eXperiment for Cellular Integration Technologies, on a secondary payload adapter called Sherpa that Seattle-based Spaceflight expected to launch on a Falcon 9 in 2015. But the continued delay of that mission forced Spaceflight this March to seek out alternatives for Sherpa customers.

"We have 14 of these satlets aggregated together in a 155-kilogram secondary payload satellite intended for low-Earth orbit at an inclination of 98 degrees with an elliptical orbit of 450-kilometer perigee," he said. "We hope to launch EXCITE aboard an Indian PSLV rocket in the early half of FY18."

DARPA's desire to launch on an Indian rocket is ironic given the U.S. government's ban on allowing companies to launch U.S. satellites on such vehicles unless given express permission through a waiver.

Palmer acknowledged that there are regulatory challenges facing DARPA as well in seeking to launch on PSLV, but the agency feels "that there is a path forward."

"That is a continuing challenge but we feel that challenge is surmountable," he said, without giving explanation as to how they would be overcome.

The DARPA satlets are modular small satellites each 10 centimeters high and 20 centimeters square with a mass of 7.5 kilograms, according to Palmer. Each satlet contains its own systems for propulsion, power, attitude control, and memory. Space technology startup Novawurks is building the spacecraft using its Hyper-Integrated Satlet, or HISat, product.

DARPA's EXCITE mission is to demonstrate the ability to build a satellite bus like a biological cellular system, using the satlets to form a unique bus around a payload, such as a sensor. Because each satlet has all the necessary systems to function in space, they provide redundancy in the event that some fail. Palmer said the satlets could make a satellite bus anywhere from a few tens of kilograms to 2,000 to 3,000 kilograms. At one point, EXCITE was part of DARPA's Phoenix program for servicing satellites, but it is now a separate program, he said.

Palmer said the mission will include several high-value payloads with user-defined adaptors including a multicore processor experiment, radios, a pathfinder telescope and other environmental monitoring sensors. Cubesat manufacturer Pumpkin is supplying "snap-on" solar wings. The EXCITE mission will also have a free-flyer telescope, Palmer said.