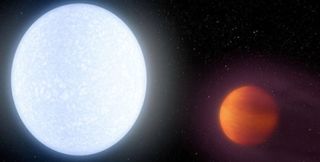 Astronomers have found the hottest known exoplanet, a world where temperatures exceed those on the surface of most stars.

The Jupiter-like planet, known as KELT-9b, zips around its hot host star once every 1.5 Earth days. Its orbit is so tight that the gas giant is tidally locked, always showing the same face to the star, just as the moon shows only one face to Earth.

Temperatures on KELT-9b's "day side" reach a blazing 7,800 degrees Fahrenheit (4,300 Celsius), the planet's discoverers said. That's hotter than the surface of the dwarf stars that dominate the Milky Way galaxy, and just 2,200 degrees F (1,200 degrees C) cooler than the surface of the sun. (However, temperatures in the sun's outer atmosphere, or corona, can reach about 3 million degrees F, or 1.67 million degrees C.) [Gallery: The Strangest Alien Planets]

Such extreme temperatures make KELT-9b a truly otherworldly place. For example, molecules such as water and carbon dioxide likely cannot exist in the planet's atmosphere, the researchers said.

"It’s a planet by any of the typical definitions based on mass, but its atmosphere is almost certainly unlike any other planet we've ever seen just because of the temperature of its day side," Scott Gaudi, professor of astronomy at The Ohio State University, said in a statement. Gaudi is co-leader of the study announcing the discovery of KELT-9b, which was published today (June 5) in the journal Nature.

The host star KELT-9 is bigger and hotter than the sun, and its intense radiation is causing KELT-9b's atmosphere to puff up: The planet is 2.8 times more massive than Jupiter but only half as dense, researchers said.

"KELT-9 radiates so much ultraviolet radiation that it may completely evaporate the planet," study co-leader Keivan Stassun, a professor of physics and astronomy at Vanderbilt University in Tennessee, said in the same statement. "Or, if gas giant planets like KELT-9b possess solid rocky cores as some theories suggest, the planet may be boiled down to a barren rock, like Mercury."

The researchers discovered KELT-9b using the Kilodegree Extremely Little Telescope (KELT) at Winer Observatory in southeastern Arizona, which spotted the exoplanet crossing, or transiting, its host star's face. (There is another KELT scope in South Africa as well; the inexpensive instruments are designed to detect planets transiting relatively bright stars.)

The astronomers aim to observe KELT-9b with other instruments, including NASA's Hubble and Spitzer space telescopes and the agency's $8.9 billion James Webb Space Telescope, which is scheduled to launch in late 2018.

Hubble imagery could reveal if KELT-9b really is evaporating — if it possesses a comet-like tail — and help astronomers assess how long the planet might be able to survive as a gas giant (as opposed to a radiation-blasted core).

"As we seek to develop a complete picture of the variety of other worlds out there, it’s important to know not only how planets form and evolve, but also when and under what conditions they are destroyed," Stassun said.

The research team also presented the new results today at the 230th meeting of the American Astronomical Society in Austin, Texas.