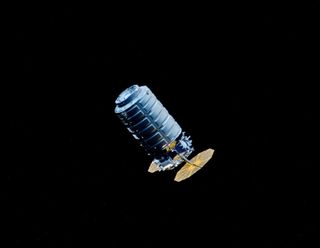 A privately built Cygnus cargo ship left the International Space Station Sunday (June 4) to cap a successful delivery mission for NASA with a novel experiment: igniting a fire in weightlessness.

The Orbital ATK-built Cygnus spacecraft was released into space via robotic arm by NASA astronaut Jack Fischer at 9:10 a.m. EDT (1310 GMT) as both cargo ship and station sailed 250 miles (402 kilometers) above the southern Atlantic Ocean. The automated Cygnus, called the S.S. John Glenn in honor of the late Mercury astronaut John Glenn, delivered 7,600 lbs. (3,500 kilograms) of NASA supplies to the station in April.

"Godspeed and fair landings, S.S. John Glenn," Fischer said as the spacecraft pulled away from the space station. "It has been an honor." [Relive the Cygnus S.S. John Glenn's Launch]

While Sunday's station departure ended Cygnus' primary resupply mission, the spacecraft still has some science to do before it is disposed of on June 11 by being intentionally burned up in Earth's atmosphere.

Chief among that science is NASA's SAFFIRE III, a fire-in-space experiment designed to test how large-scale fires behave in weightlessness. It is the third and final test in the first phase of flame experiments in space, NASA officials said. Two other SAFFIRE experiments were performed on earlier Cygnus flights in 2016.

"As the first chance to actually study a realistically scaled fire, the SAFFIRE experiments have provided valuable insight into fire behavior inside a confined low-gravity environment," SAFFIRE principal investigator David Urban said in a statement.

During the SAFFIRE III fire experiment, a large piece of fabric will be set ablaze inside Cygnus, where the oxygen level will be similar to that of the space station.  Scientists will measure how the flame spreads at different rates of airflow, NASA officials said. The actual burn event will last about 20 minutes, with the experiment itself running 2.5 hours, they added.

Over the next week, video and data from the fire experiment will be beamed to scientists on Earth ahead of Cygnus' fiery re-entry on June 11. NASA will use the data collected from the space fire test to designed safer spacecraft environments for astronauts in space.

"SAFFIRE IV-VI will extend the research by including larger, more energetic fires and by testing post-fire cleanup systems," Urban said.

And once the space fire experiment is over, Cygnus still has more work to do. On Thursday (June 8), the spacecraft will deploy four small Lemur-2 cubesat satellites for Spire Global in a flight arranged by the company Nanoracks.

Then on Saturday (June 3), a SpaceX Falcon 9 rocket launched the first reused Dragon space capsule on its own delivery flight to the space station for NASA. Like Orbital ATK, SpaceX has a commercial contract with NASA to fly cargo missions to the space station. Saturday's launch was the eleventh such flight by SpaceX.

"This is the first time in history that two U.S. commercial cargo vehicles will be in free flight at the same time," NASA spokesman Rob Navias said during NASA TV commentary today.