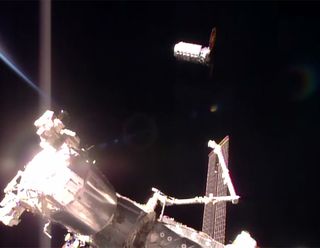 The Orbital ATK Cygnus cargo ship S.S. John Glenn arrives near the International Space Station on April 22, 2017 to deliver tons of supplies for the orbiting lab's crew. The robotic spacecraft is named in honor of the famed Mercury astronaut John Glenn, who died in December.
(Image: © NASA TV)

John Glenn has arrived on the space station.

The S.S. John Glenn, Orbital ATK's seventh Cygnus cargo ship to deliver supplies and science for the crew on board the International Space Station, completed a four-day rendezvous to the orbiting laboratory on Saturday morning (April 21). The robotic freighter was named in honor of the late Mercury astronaut and U.S. Senator.

"We are very proud to welcome on board the S.S. John Glenn," Pesquet said.

With the Cygnus in grasp, flight controllers at NASA's Mission Control Center in Houston will take over from Pesquet and Whitson and to guide the spacecraft to a berthing on the Earth-facing port  of the space station’s Unity module, where it will remain attached for the next 85 days.

Launched atop a United Launch Alliance (ULA) Atlas 5 rocket from the Cape Canaveral Air Force Station in Florida on Tuesday (April 18), the S.S. John Glenn could have arrived at the space station earlier, but held off its approach (referred to by NASA as "station-keeping") to allow Russia’s Soyuz MS-04 spacecraft to dock with crewmembers Jack Fischer of NASA and Fyodor Yurchikhin of the Russian federal space corporation Roscosmos on Thursday.

With the arrival of the Cygnus came the delivery of more than 7,600 lbs. (3,500 kilograms) of cargo, including the research materials to support dozens of new and ongoing science investigations. The delivery will enable studies on cancer-fighting drugs and crystal growth.

Also aboard the S.S. John Glenn is equipment to be installed outside the space station during a spacewalk scheduled for May 12, 38 CubeSats (many built by university students from around the world) to be deployed from the station’s Japanese airlock (or from the Cygnus itself) and a new advanced plant growth habitat.

"A big difference in this system, compared to [the plant growth chamber] Veggie, is that it requires minimal crew involvement to install the science, add water and perform other maintenance activities," said Bryan Onate, the habitat's project manager, in a NASA interview. "We are learning how plants grow in space and what levels of commodities, such as light and water, are required so we can maximize our growth with the least resources.”

Once emptied of its deliveries, the space station's crew will refill the S.S. John Glenn with spent equipment and other refuse to be destroyed during the spacecraft's destructive re-entry into Earth's atmosphere in July. Prior to that plunge — but after the Cygnus departs from the space station — the cargo freighter will support the third in a series of experiments into how fire burns in microgravity.

The spacecraft’s namesake, John Glenn, died on Dec. 8, 2016, at the age of 95 and was interred at Arlington National Cemetery on April 6. A Marine Corps Colonel and four-term U.S. Senator from Ohio, Glenn was the last of NASA's Mercury astronauts to die. In addition to being the first American to orbit Earth, Glenn became the oldest astronaut to fly in space at age 77 on space shuttle Discovery in 1998 (a record he still holds).