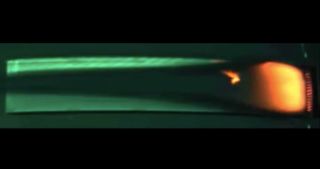 NASA has declared its latest round of fire-in-space experiments a success.

On Nov. 21, mission controllers on the ground lit up the Spacecraft Fire Experiment II (Saffire-II) aboard the private, uncrewed Cygnus cargo spacecraft, shortly after the freighter had left the International Space Station (ISS). You can watch some of the space fires burn in this NASA video released after the successful experiment.

Saffire-II burned nine different samples, in an effort to gauge the flammability of various materials in a microgravity environment. These 12-by-2-inch (30 by 5 centimeters) samples included silicon of different thicknesses; a cotton-fiberglass blend; plexiglass; and Nomex, a commercially available material that's used in spacecraft on cargo bags and as a fire barrier, NASA officials said.

Everything went well during the experiment, they added: All nine samples burned as planned, and the Saffire-II team collected more than 100,000 images. All data had come back down to Earth by Friday (Nov. 25), at which point Saffire-II achieved "complete mission success," NASA officials wrote in an update.

The three-phase Saffire program investigates how fires spread in space, with the aim of helping engineers design safer crewed vessels down the road. Saffire-I ignited a single, large piece of cotton-fiberglass material aboard a different Cygnus in June, and Saffire-III will set a similarly large-scale fire when its time comes on a future Cygnus mission, NASA officials have said.

You can learn more about the Saffire program here: https://www.nasa.gov/saffire

The Cygnus that housed Saffire-II arrived at the ISS on Oct. 23, delivering thousands of pounds of supplies and scientific experiments to the astronauts aboard the orbiting lab. The freighter departed the space station on Nov. 21, and then it hung around in orbit long enough for the Saffire-II experiments to take place and to deploy several tiny cubesats.

The Cygnus then re-entered Earth's atmosphere on Sunday (Nov. 27), burning up in an intentional death dive. (Cygnus vehicles, which are built by the Virginia-based aerospace company Orbital ATK, are designed to be disposable.)