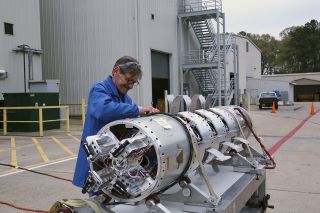 NASA will launch a sounding rocket to release artificial clouds along the mid-Atlantic coast June 1, so researchers below can track the motion of space particles. Here, the sounding rocket's payload has its ampule doors open during testing at Wallops Flight Facility in Virginia.
(Image: © Berit Bland/NASA)

Update for June 15: NASA's next attempt to launch a small sounding rocket to create glowing clouds in the night sky will occur no earlier than Saturday night (June 17). Liftoff from NASA's Wallops Flight Facility from Wallops Island, Virginia is scheduled for some time between 9:05 p.m. EDT and 9:20 p.m. EDT (0105-0120 GMT).

If you're along the mid-Atlantic coast very early Thursday morning (June 1), look up! A NASA sounding rocket will release luminescent blue-green and red vapor into the sky. Weather permitting, the artificial clouds will be visible from New York to North Carolina and west as far as Charlottesville, Virginia.

The sounding rocket is set to launch between 4:27 and 4:42 a.m. EDT (0827-0842 GMT) from Wallops Flight Facility in Virginia, and will release the glowing artificial clouds so researchers below can track the motion of particles in Earth's upper atmosphere and ionosphere. You can watch the launch live here on Space.com, courtesy of NASA Wallops. You can also watch the launch directly from the Wallops Flight Facility here. (NASA officials stressed that the launch is very weather dependent, as clear skies are needed to observe the artificial clouds from the ground.)

The vapor tracers will be released from points 96 to 120 miles high (154 to 193 kilometers) and will pose no hazard to people who live along the coast, NASA officials said in a statement. The tracers will glow after release as as barium, strontium and cupric-oxide interact with the atmosphere, NASA said.

The rocket will eject 10 soft-drink-size canisters between 6 and 12 miles (10 to 20 km) from the rocket's main payload, and these containers will release the vapor between 4 and 5.5 minutes after launch, officials said. The launch was rescheduled from May 29 due to weather.

Cameras will be stationed on the ground at Wallops as well as in Duck, North Carolina; although clear skies are preferred, the launch can still go on without clear conditions at both sites, NASA officials said. The canisters will be released from a two-stage Terrier-Improved Malemute sounding rocket, and the entire mission flight time is set for 8 minutes. The main payload, which deploys the canisters, will land about 90 miles (145 km) from Wallops Island in the Atlantic Ocean, and will not be recovered, officials said.

The "What's Up at Wallops" app for iOS or Android provides additional information about the launch and a compass to identify which direction to look.

Editor's note: NASA has delayed the launch until Saturday, June 3, due to cloud cover. If you capture an amazing image of the sounding rocket launch or the colorful artificial clouds that you would like to share with Space.com and its news partners for a story or photo gallery, send photos and comments in to managing editor Tariq Malik at: spacephotos@space.com.