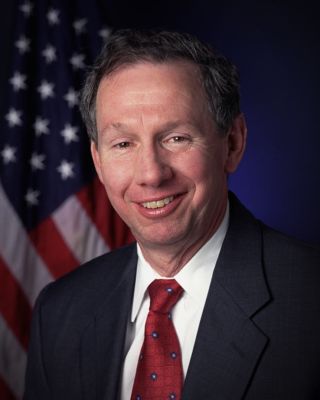 COLORADOSPRINGS, Colo. - The U.S. civil space exploration program is a matter ofnational strategy. But the country's space policy -- of returning to the Moon,trekking onward to Mars and beyond -- needs to fly high above partisanbickering.

Griffinsaid that NASA is a nearly unique government agency in the sense that it enjoysenormous name recognition and immensely positive public approval...a level ofpopularity that manifests itself in terms of "brand loyalty."

Nevertheless,Griffin continued, the same people who resoundingly approve of NASA are notsure why, or at least cannot express it clearly.

"Butwhen those being questioned are informed of even some of the more prosaiccontributions of the space program to their daily lives --  things likethe development of integrated circuits, medical monitoring equipment forhospital patients, navigation and weather satellites, materials used in jointreplacement surgery -- their approval shoots up into the 90 percent range,"Griffin said.

Griffinsuggested that a number of touchy-feely feelings resonate with the public. Forone, NASA involves the deep satisfaction of overcoming extremely demandingtechnical challenges. "And, yes, feeling for NASA invokes the concrete benefitswe obtain for our entire society when we tackle, and learn to overcome, thosechallenges," he said.

Harkeningback to the Apolloera, the public rebound of thinking "if we can do this, we can do anything"was a spinoff sentiment that speaks volumes.

"Ibelieve this thought provides more of a justification for our space programthan any rational, dollars-and-cents explanation I can ever hope to provide asto what NASA represents to the American public and those of us in the spacebusiness," Griffin said.

However,Griffin posed the questions: "Are America's best days behind us? Will ourfuture be dimmer than our past?" Human spaceflight is a strategic capabilityfor a nation, he emphasized.

Griffinspotlighted the fact that today is the 46th anniversary of humankind'sfirst foray into Earth orbit - the pioneering sojourn of Russian, YuriGagarin, in his Vostok 1 spacecraft on April 12, 1961.

Humanspaceflight has been accomplished only by the United States, Russia, and mostrecently China, Griffin said.

"Indiahas announced its intention to develop such capabilities. Having visited severalspace facilities in China and India this past year, and meeting theiraerospace engineers, I must say that I am very impressed by the methodical,disciplined approach both countries have taken in developing their spaceindustrial base and capabilities. The national economies of these countriesexceed in scale the economy of the United States as it existed in the early1960s," Griffin said.

TheNASA chief added that both Europe and Japan also have the economic andtechnical wherewithal to carry out their own human spaceflight program. "It isagain simply a matter of making the strategic choice to do it."

Beit human spaceflight, output from the Hubble Space Telescope, as well as humantelepresence via the Spirit andOpportunity rovers working away on Mars - these activities demonstrate thestrategic impact of the civil space program

Restatingthe slogan, "If we can do this, we can do anything," Griffin also added: "Wecould also do nothing.  It is a fairly simple choice, really.  Wecould choose to do great things, we could simply sit back and watch, or wecould choose to mock those who dare even to try."

"Whatwe really need is to focus on the tasks ahead of us and the pace of the work tobe done, rather than fomenting discord and putting space policy in partisan,political terms," Griffin said.