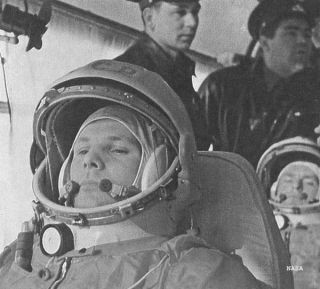 As NASAcelebrates the silver anniversary of its firstshuttle launch, the overall effort of human spaceflight hits its ownlandmark today.

Forty-fiveyears ago in 1961, a young cosmonaut became first human ever to slip the bondsof Earth when his Vostok 1 spacecraft roared skyward to usher in the age ofhuman spaceflight.

Then27-year-old cosmonaut Yuri Gagarin circled the Earth for 108 minutes on acomputer-controlled flight that placed the mantle of First Man in Space firmly inthe hands of the then-Soviet Union, which had already made in history in 1957 withits launch of Sputnik.

AlanShepard, the first U.S. astronaut to reach space, launched 23 days later ina race that culminated with NASA's Apollo Moon landings. Since then, NASAshuttles, RussianSoyuz and China'sShenzhou vehicles - not to mention a series of ever-largerspace stations - have maintained a human presence in space.

"It'samazing to me that we've been in the space business for nearly half a century,"said NASA associate administrator Rex Geveden recently after watching aRussian-built Soyuz rocket launch three astronauts toward the InternationalSpace Station (ISS) from the very same pad that saw Gagarin's historic 1961 liftoffat Baikonur Cosmodromein what is now Kazakhstan. "Your sense of history...it's a remarkable feeling."

Gagarin'sflight ended not with him riding his spacecraft down to Earth, but with aparachute landing after he ejected from his descent capsule.

"It waspurely coincidence," Crippen told SPACE.com of the spaceflight link. "Weactually tried to launch on the 10th but ran into some computerproblems...Two days later we went out to try it again and it happened to beGagarin's anniversary."

ForGagarin, cosmonaut success turned into world fame after his orbital trek andspace aficionados hold an annual Yuri's Nightin his honor. The cosmonaut was later killed in a plane crash while training in a UTI-MiG-15 aircraft on March 27, 1968.

"There're lotsof things that go through my mind," said NASA astronaut Jeffrey Williams, whoserves as space station flight engineer for the Expedition13 mission, of Gagarin's anniversary during a recent space-to-ground link. "It'sa great day to remember all the work that's gone before us."

Williams,Expedition 13 commander Pavel Vinogradov and Brazil'sfirst astronaut Marcos Pontes launched toward the ISS from Gagarin'sformer launch pad on March 29EST. Pontes returnedto Earth on April 8 with the Expedition12 crew, leaving Vinogradov and Williams aboard the ISS for a six-monthmission.

"It remindsus now that we're in the middle of the current chapter of space exploration,which doesn't end here," Williams said of the joint flight anniversaries ofGagarin and NASA's Columbia orbiter. "This is only a stepping stone to thefuture, back to the Moon and on to Mars."