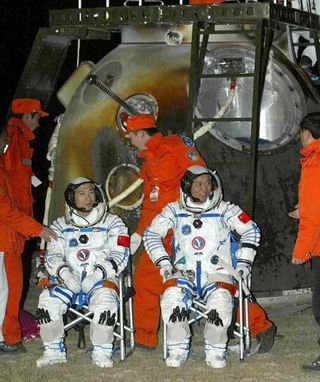 Both astronauts - also known as "taikonauts" - were reported to be in good health afterlanding, and wore broad smiles while waving to recovery crews, photographersand television cameras after exiting their Shenzhou 6 spacecraft. Their egressand a welcoming ceremony were broadcast live on CCTV.

"I want to thank the people fortheir love and care," Fei said during the ceremony, in which both astronautwere given flowers and seated in chairs.

They later washed down chocolate andinstant noodles with herbal tea while undergoing preliminary medical checks,Xinhua said, adding that doctors on scene had found the space flyers in"good health." The astronauts thenboarded recovery helicopters to begin their journey back to Beijing, the newsagency said.

CCTV showed flight controllers andtechnicians at Beijing Aerospace Command and Control Center bursting into applause afterhearing Fei and Nie were safe and back on Earth.

In Nie's hometown of Zaoyang, inChina's central province of Hubei, fireworks lit up the dark morning sky asrevelers danced to celebrate the astronauts' safe return to Earth in videobroadcast on CCTV. A similar celebration was held in Fei'shometown of Kunshan, located in China's easternprovince of Jiangsu.

"I declare that China's Shenzhou 6manned spaceflight has been a great success," said Chen Bingde,commander-in-chief of China's space program, during a post-landing address atBeijing Aerospace Command and Control Center broadcast on CCTV.

That first mission, Shenzhou5, launched astronaut Yang Liwei into orbit onOct. 15, 2003. China is the third country to independently launch humans intoEarth orbit after Russia and the U.S. But unlike Yang's flight, which was guardedfrom the public eye, much of the Shenzhou 6 mission - from its launch tolanding - was broadcast live on national Chinese television.

China's space program is a source ofnational pride and prestige for the nation's Communist government, which hasannounced plans to build a mannedspace station and aims at launching an unmanned probe to the Moon by 2010. TheShanghai Daily newspaper reported Thursdaythat China's next manned mission, Shenzhou7, is expected to launch in 2007 and include the nation's first spacewalkand a "docking experiment."

Shenzhou 6's five-day spaceflightmarked the first time that Chinese astronauts entered their spacecraft'sorbital module and participated in science experiments and tests of newspaceflight hardware They also took digital photographs of the space, the Earthand their work inside Shenzhou 6, according to state media reports.

China's Shenzhou manned spacecraftborrow a general design from Russia's Soyuz spacecraft, and consist of areentry capsule - where the astronauts sit during launch and landing - an orbitalmodule to house experiments, equipment and living facilities, and a propulsionmodule to carry power and engine systems. But the spacecraft is heavilymodified and modernized, and its orbital module - which carries its own solarpanels - can remain in orbit for long periods of time.

"The successful mission is ofgreat significance for elevating China's prestige in the world and promotingChina's economic, scientific and national defense capabilities, and itsnational cohesiveness," Wu said of Shenzhou 6.