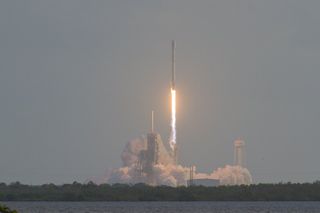 A SpaceX Falcon 9 rocket launches the NROL-76 spy satellite on a classified mission for the National Reconnaissance Office on May 1, 2017. The mission launched from Pad-39A at NASA's Kennedy Space Center in Cape Canaveral, Florida.
(Image: © Michael Seeley/USAF)

CAPE CANAVERAL, Fla. — A SpaceX Falcon rocket lifted off from the Kennedy Space Center in Florida on Monday (May 1) to boost a classified spy satellite into orbit for the U.S. military, then turned around and touched down at a nearby landing pad.

It was the 34th mission for SpaceX, but its first flight for the Department of Defense, a customer long-pursued by company founder Elon Musk. The privately owned SpaceX once sued the Air Force over its exclusive launch services contract with United Launch Alliance (ULA), a partnership of Lockheed-Martin and Boeing.

Launch was delayed one day to resolve a problem with a first-stage engine sensor.

In addition to the NRO's business, SpaceX has won two Air Force contracts to launch Global Positioning System satellites in 2018 and 2019.

For now, the military's business is a fraction of more than 70 missions, worth more than $10 billion, slated to fly on SpaceX rockets. But with up to 13 more military satellite launches open for competitive bidding in the next few years and ULA's lucrative sole-source contract due to end in 2019, SpaceX is angling to become a major launch service provider to the Department of Defense.

At the request of the NRO, SpaceX cut off launch coverage 2 minutes and 48 seconds after liftoff, some 30 seconds after the booster’s first-stage separated from the upper-stage. At that time, the rocket's second-stage had fired up to carry the spy satellite into a low-Earth orbit , SpaceX’s launch license from the Federal Aviation Administration showed.

The NRO declined to provide further details about the satellite or its orbit.

SpaceX continued to broadcast the booster's return flight and touchdown at the company's nearby Landing Zone 1 at Cape Canaveral Air Force Station.

"And we have touchdown! The first stage has landed back at Landing Zone 1," SpaceX lead mechanical design engineer John Federspiel said during launch commentary. "Another good day for us at SpaceX. That is a beautiful sight to see."

A month ago, SpaceX for the first time launched one of its previously flown rockets to send an SES communications satellite into orbit, a key step in Musk's quest to demonstrate reusability and slash launch costs.

"I would be comfortable if we were to fly on a reused booster," Raymond said. "They've proven they can do it."

SpaceX landed its first orbital rocket in December 2015, a feat it has now repeated nine times. Four of those touchdowns have occurred at a landing pad at Cape Canaveral Air Force Station and six returned to a platform floating in the ocean. The landings at sea are an option if the rocket doesn't have enough fuel to return all the way back to the launch site.

Editor's note: This story was updated to correct the timing of Gen. Raymond's comments at the Space Symposium. They were made last month, in April, not earlier this month, in May.