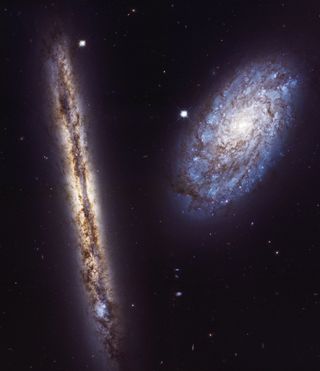 In celebration of the 27th anniversary of the launch of NASA's Hubble Space Telescope on April 24, 1990, astronomers used the legendary telescope to take a portrait of a stunning pair of spiral galaxies. The edge-on galaxy is called NGC 4302, and the tilted galaxy is named NGC 4298.
(Image: © NASA/ESA/STScI/M. Mutchler)

Twenty-seven years after it launched into orbit, the Hubble Space Telescope continues to snap spectacular views of the cosmos. The aging space observatory, which launched into low Earth orbit on April 24, 1990, kicked off this year's birthday celebration with some dazzling new views of a pair of spiral galaxies.

NASA released the photos Thursday (April 20), just a few days before the anniversary. The images show NGC 4302 and NGC 4298, two neighboring pinwheel galaxies that have similar structures yet look completely different. NGC 4298 is clearly a spiral galaxy like the Milky Way, but NGC 4302 looks more like a glowing bar of stars. Because we see NGC 4302 edge-on, its spiral shape is not apparent.

"This starry pair offers a glimpse of what our Milky Way galaxy would look like to an outside observer," Hubble scientists said in a statement. [Celestial Photos: Hubble Space Telescope's Latest Cosmic Views]

Both of these spiral galaxies lie about 55 million light-years away, in the constellation Coma Berenices, also known as "the Wig." They're also members of the Virgo Cluster, which contains up to 2,000 galactic neighbors.

The famous astronomer William Herschel discovered both galaxies in 1784, but he originally called them "spiral nebulas" because he did not know that they were distant galaxies.

More than a century later, astronomer and cosmologist Edwin Hubble realized that these "spiral nebulas" were actually galaxies. Another century later, NASA named the Hubble Space Telescope after him.

The Hubble Space Telescope is a joint project between NASA and the European Space Agency. Since its launch 27 years ago, it has imaged more than 42,000 celestial objects and circled Earth nearly 148,000 times while racking up 3.8 billion "frequent-flier miles," Hubble scientists said.