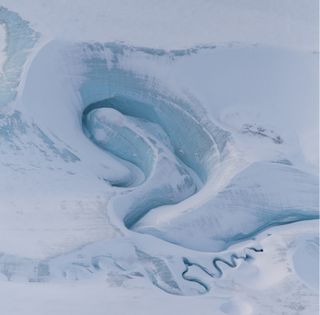 Meltwater channels are carved into DeVries Glacier in the Canadian Arctic. This aerial image was captured on March 29, 2017.
(Image: © NASA Goddard/Jeremy Harbeck)

As if a giant ran a finger in a swirling manner through an icy sandbox, meltwater channels have carved out aqua-colored squiggly lines in an Arctic glacier.

And a NASA scientist has captured the ice art in a gorgeous image showing part of the DeVries Glacier. The aerial photo was taken March 29, 2017, during NASA's Operation IceBridge mission, now in its ninth year.

The mission, which began operating in 2009, is the largest airborne survey of both of Earth's poles, providing a yearly window into ice changes occurring in Antarctica and Greenland. [Images: Greenland's Gorgeous Glaciers]

While flying over Ellesmere Island in the Canadian Arctic Archipelago, aboard the P-3 Orion research aircraft, Jeremy Harbeck, a sea ice scientist at NASA's Goddard Space Flight Center, snapped the image with a handheld digital camera.

Another image of the glacier was captured during the flight by a high-resolution camera called the Digital Mapping System attached to the belly of the research plane. That camera snaps overlapping images of the sights, pointed straight down, throughout a flight. "The images provide a visual reference to help researchers better understand the data collected by other instruments," according to NASA's Earth Observatory, which released the images this week.

Channels that drain meltwater from a glacier can be seen in the images, though no actual water appears to be present.

"This is likely a meltwater channel left over from last year's melt, and is simply not covered in snow," Harbeck said, referring to the channels seen in the image that he snapped with his handheld camera, as reported by the Earth Observatory.

Compared with other exposed meltwater channels that Harbeck had seen during the previous survey of DeVries and other glaciers on Ellesmere, he said, "This one was the most sinuous I could remember."

This Canadian Arctic spit of land is a wonderland of sorts for curious scientists: Ellesmere Island is home to the northernmost perennial spring, which has carved a gash into the hillside resembling the gullies seen on Mars. Speaking of Mars, bacteria found on Ellesmere thrive at some of the coldest temperatures known for bacterial growth —  5 degrees Fahrenheit (minus 15 degrees Celsius). As such, the microbes hold clues to how life might survive on some extraterrestrial-chilled places, like Mars or Saturn's moon Enceladus, the researchers of that study said previously. A mummified forest, dating back at least 2 million years, was also discovered on the island, and described by scientists in 2010 at an American Geophysical Union meeting.

This year's IceBridge survey of the Arctic began March 9 and will continue through May 12, the Earth Observatory reported.