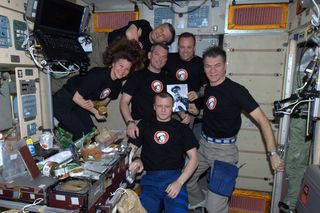 An International Space Station crew celebrated Yuri's Night, the anniversary of the first time a human flew in space on April 12, 1961, with dinner and a movie — and posing with a photo of the celebration's namesake, Yuri Gagarin.
(Image: © NASA/ESA)

Whether you want to sample a new space beer or meet an astronaut, today (April 12) could be your chance. Yuri's Night, a global celebration of humanity's accomplishment in space, likely has a neat event near you.

These days, the yearly celebration also looks forward to future spaceflight opportunities. Several companies are looking to offer private spaceflights in the coming years, so more spaceflight participants will be able to share their flying experiences during future Yuri's Nights, said Ryan Kobrick, president and chair of the event. [Vostok 1: How the First Human Spaceflight Worked (Infographic)]

"It might be something that stimulates the growth [of the event]," Kobrick said in a Space.com interview. He pointed out that space tourism company Virgin Galactic is looking for several qualities in its participants, including the willingness to communicate the experience, Kobrick said — at the very least, exercising their bragging rights.

Kobrick, who was undergoing training with the private Project PoSSUM spaceflight program this week, added that in recent years, the biggest Yuri's Night events have had a momentum of their own and he doesn't need to send out regular reminders to encourage participation.

Occasionally — Kobrick said he doesn't know if this will happen this year — Yuri's Night board members even receive messages from the International Space Station. Last year, Italian astronaut Samantha Cristoforetti was among those sending a goodwill message, he said.

This year, Yuri's Night will be celebrated in more than 50 countries and on all seven continents. Most of the 200-plus events will be in-person, but there is a growing proportion taking place online.

There will also be a gathering in the virtual world "Second Life" between 3 p.m. and 11 p.m. EDT (1900 UTC April 12 to 0300 UTC April 13), featuring Russian-inspired piano selections, an "eclectic supersonic flight through space and time," and participation from entities such as the National Space Society and the International Spaceflight Museum. More details are here: http://yurisnight.net/events/yuris-night-second-life/

If in-person events are more your style, in Florida, the Bugnutty Brewing Company is releasing a new "Sputnik Russian" stout in conjunction with Yuri's Night. More information is available here: http://untappd.com/v/bugnutty-brewing-company/1018668/event/42179

Other events taking place in the United States on April 12 include an "Astronomy on Tap" event in Chicago, a planetarium show and stargazing night at Yale University in Connecticut, a "Space Station Signal Party" in Titusville, Florida (near the Kennedy Space Center), and an "Out of This World Space Circus" in Fairfax, Virginia. (The circus actually runs between April 7 and April 16, including a performance on April 12.)

Given that April 12 falls on a weeknight, there are other events that either took place last weekend or will happen this coming weekend. One event that already passed was the flagship Yuri's Night in Los Angeles, which was hosted at the California Space Center underneath the Endeavour space shuttle.

To find events near you, you can consult the Yuri's Night website.