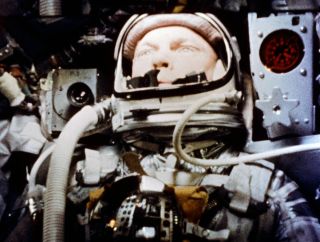 Update for 1 p.m. EDT: The service for astronaut John Glenn has concluded. You can see our full story here: John Glenn, First US Astronaut to Orbit Earth, Interred at Arlington Cemetery

John Glenn, who was America's first astronaut to orbit the Earth, will be interred at Arlington National Cemetery in Virginia today (April 6) and you can follow the service honoring the space pioneer, courtesy of NASA.

The NASA webcast of the Glenn memorial service will begin at 9 a.m. EDT (1300 GMT) and will be broadcast live on NASA TV, which you can see here, courtesy of NASA.

Glenn, the last surviving one of the Mercury program, died at age 95 in December. After his orbital flight in 1962, Glenn waited 36 years to get another chance to fly into space. He returned at age 77 on shuttle mission STS-95, performing research intended to learn more about how a senior's body responds to spaceflight. [In Photos: John Glenn, Astronaut Pioneer]

Glenn was born July 18, 1921, in the small town of Cambridge, Ohio. A few years later, his family moved to the slightly larger town of Concord. He married his high-school sweetheart, Annie, in 1943. Their marriage persisted for 73 years; Annie attended Glenn's funeral a few months ago in a wheelchair.

Glenn's path to the space program began with the Second World War. He joined the Navy after a Japanese attack on Pearl Harbor in December 1941, later moving on to the Marines. He flew combat missions in both the Second World War and the Korean War, receiving accolades for his work. Afterwards, Glenn became a test pilot and in 1957, flew the first transcontinental supersonic flight from Los Angeles to New York.

His experience caught the attention of NASA and propelled him to the top of a short list of test pilot candidates for the first astronaut program. Glenn and six other astronauts were selected in 1959 as the "Mercury 7,"just as the United States and the Soviet Union superpower nations entered into a fierce space race to show technological superiority.

The first U.S. orbital flight by Glenn, however, was almost five hours long. Famously, he was brought in for a landing after a false indicator on his control panel showed the heat shield was loose; Glenn was only informed at the last minute about the anomaly, but landed safely. The public adored Glenn's flight achievement and his ability to speak in public, making him an instant celebrity upon landing.

Deemed too valuable an asset to the United States to fly in space again, Glenn left NASA shortly after his flight for a career in politics. He served in the United States Senate for four terms (between 1974 and 1999) and made an unsuccessful run for the United States presidency. [Astronaut John Glenn's Greatest Moments]

Glenn's last flight in space for STS-95 in 1998 came after he spent years lobbying NASA for a flight to study geriatrics on a shuttle mission. His return to orbit garnered worldwide attention. After his return, Glenn continued to make regular public appearances, even late in his life.

A notable late appearance took place in 2009. Glenn, then 87 years old, spoke during ceremonies at the Smithsonian Air and Space Museum in Washington, D.C. honoring the 40th anniversary of the first moon landing by astronauts, Apollo 11.