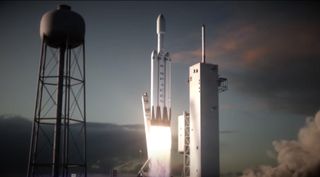 Speaking after the company's success in launching its first pre-flown first stage with the SES-10 satellite aboard, Musk said SpaceX has worked out most of the challenges associated with getting three Falcon 9 cores to fly together — a task that has proven much more complex than it originally appeared.

"Falcon Heavy is one of those things that at first it sounded easy," Musk said. "We'll just take two first stages and use them as strap-on boosters. And like, actually no, this is crazy hard, and required a redesign of the center core, and a ton of additional hardware. It was actually shockingly difficult to go from a single core to a triple-core vehicle." [SpaceX's Falcon Heavy Rocket in Images]

Falcon Heavy is designed to lift more than 54 metric tons to low Earth orbit, 22 metric tons to geostationary transfer orbit, or 13.6 metric tons to Mars. When SpaceX first revealed the Falcon Heavy in 2011, the company anticipated a first mission in 2013, but complexities in getting the vehicle to work, combined with delays from two Falcon 9 failures, dragged out that timeline.

"Our expectation is probably a late summer launch of Falcon Heavy," he said.

Musk tweeted March 31 that SpaceX is also considering trying to retrieve the Falcon Heavy demo flight's upper stage for full reusability. The probability of success is low, he said, but could be worth trying anyway. Yesterday Musk mentioned trying to return the second stage from Falcon 9 missions as well, and as an added bonus from the SES-10 mission, already accomplished a surprise recovery of the Falcon 9 payload fairings.

The first stages reused in the Falcon Heavy's tentative 2017 debut will go towards SpaceX's plan to refly about six boosters this year.

"For Falcon Heavy, two of the side boosters are pre-flown boosters, so that alone will be two cores right there," Musk said.

SES is considering using two more "flight-proven" Falcon 9 rockets this year, which would fulfill five of the six reusable rocket missions SpaceX is gunning for, according to SES Chief Technology Officer Martin Halliwell.

Halliwell said SES has three more launches with SpaceX this year, and is willing to use flight proven rockets again to help normalize the concept of using reusable launchers.

Musk said the rocket cores for Falcon Heavy's first flight are two to three months away from completion. He emphasized that the first launch will carry a lot of risk, and as such, SpaceX doesn't plan to carry a valuable payload or payloads with it.

"We will probably fly something really silly on Falcon Heavy because it is quite a high risk mission," he said.

SpaceX will seek to recover all the boosters from the first Falcon Heavy flight, assuming all goes according to plan. Musk said the two side boosters would land back at Cape Canaveral Air Force Station, followed by the center core returning to a drone ship in the Atlantic.

SpaceX anticipates having Cape Canaveral's Space Launch Complex-40 — the pad damaged in the September 2016 explosion of a Falcon 9 during a fueling procedure — operational again before launching Falcon Heavy. SpaceX needs to exercise this caution because were a Falcon Heavy launch to go awry from Pad 39A, the company would be out of launch sites in Florida. Musk said SLC-40 would serve as the go-to location for Falcon 9 missions, and SpaceX would keep Falcon Heavy launches at Pad 39A.

Musk also said SpaceX is prioritizing fulfilling launch commitments to its backlog, which is mainly waiting on Falcon 9 missions. A number of those customers have faced protracted delays and some, such as Spaceflight Inc., have sought alternative launchers after the wait became too much to bear.

SpaceX does have customers for Falcon Heavy as well. The U.S. Air Force, Intelsat, Inmarsat, ViaSat and Arabsat all booked Falcon Heavy missions, though Inmarsat and ViaSat have since sought alternative rides. ViaSat switched its ViaSat-2 satellite to a mid-2017 Arianespace Ariane 5 launch. Inmarsat reserved a Proton launch as a backup for Europasat/Hellas-Sat-3, a condo-satellite split between Inmarsat and Greek satellite operator Hellas Sat, the latter of which is a subsidiary of Saudi Arabia-based Arabsat.

Currently both Arianespace and Proton's commercial services provider, International Launch Services (ILS), are experiencing delays of their own. Arianespace has been unable to launch for nearly two weeks due to territory-wide protests in French Guiana where it launches. Russia's Proton rocket has been grounded since late 2016 due to quality control issues with second and third stage engines, and is not expected to return to flight until May. Although Inmarsat had reserved a 2017 ILS launch, delays with Proton have pushed that mission back too. ILS's commercial manifest for 2017 includes three commercial missions: one for EchoStar, one for AsiaSat and one for Hispasat.