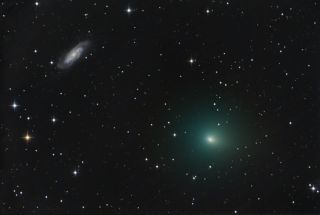 Comet 41P/Tuttle-Giacombini-Kresák zooms past the barred spiral galaxy NGC 3198 in this photo taken by astrophotographer Chris Schur on March 14. At the time, the glowing, green comet was about 16 million miles (25 million kilometers) from Earth. This "April Fool's Day Comet" will make its closest approach on April 1, passing within 13.7 million miles (22 million km) of the Earth. NGC 3198, also known as Herschel 146, may appear close by, but it lies 47 million light-years away in the constellation Ursa Major.
(Image: © Chris Schur/www.schursastrophotography.com)

An unusually favorable opportunity to view a famous periodic comet in small telescopes comes during the next couple of weeks, when  passes closer to Earth than at any return since its discovery in 1858.

The comet's perihelion point, which is that part of its orbit taking it closest to the sun, lies just outside Earth's orbit. This year, the perihelion passage occurs April 12, when the comet will be 97.1 million miles (156.3 million kilometers) from the sun. But because the orbit of the comet nearly parallels the orbit of Earth at this point, there will be a six-day period — from March 29 through April 3 — when Tuttle-Giacobini- Kresák will be very near to its closest point to Earth.

During this two-week stretch, the comet will be passing across the stars of Ursa Major and Draco, circumpolar constellations that are perpetually above the northern horizon for most viewers in the Northern Hemisphere. So that will make the comet an easy target from dusk through dawn through mid-April. [Best Telescopes for Your Money]

I must stress here that this comet is not likely to evolve into an impressive sight. However, it will be worth monitoring in the coming nights for two reasons:

More on that in a moment.

The history of Comet Tuttle-Giacobini-Kresák

Comet T-G-K was first sighted by astronomer Horace Tuttle of the Harvard College Observatory on May 3, 1858. The comet was only around 10th magnitude, which is about 40 times dimmer than the faintest star you could see with your naked eye on a dark, clear night. Astronomers observed the comet for about a month, but only an approximate orbit for it could be ascertained. It appeared to circle the sun about every six to eight years, but they could not provide a good estimate of when it might appear again, so it was considered lost. [Riding Along with Comets Using Mobile Astronomy Apps]

On June 1, 1907, Professor M. Giacobini at the Nice Observatory in France found a very faint comet that remained visible for about two weeks before it faded from view. Later, some astronomers began to suspect there was a connection between the comet Tuttle saw in the mid-19th century and the one that was picked up by Giacobini nearly half a century later. But there was not enough evidence to confirm this.

Finally Ľubor Kresák, a Slovak astronomer, ran across the same comet while scanning the skies with his giant 25 x 100 binoculars on April 24, 1951. This time, enough observations were gathered to positively tie together the comets seen by Tuttle and Giacobini with the one sighted by Kresák, proving that all three were one in the same. The comet circles the sun about every 5.5 years and was named after all three men, each coming from a different generation, in a process that took almost a century!

Will the comet surge in brightness?

If Comet 41P/Tuttle-Giacobini-Kresák were a "typical" small comet, it would appear in the coming nights as nothing more than a circular, diffuse blob of light, perhaps becoming no brighter than 8th magnitude; accessible only to those with small telescopes or, at the very least, good binoculars on dark, clear, moonless nights. To many, especially neophytes in astronomy, this isn't much of a sight to see. The late Dr. Isaac Asimov was once shown a similarly small, dim comet through a telescope and later commented, "It didn't move me at all." That, in fact, is what Comet T-G-K will likely resemble. [14 Best Skywatching Events of 2017]

Unless there's an outburst or surge.

In late May 1973, a few days before Comet T-G-K arrived at perihelion, the comet's brightness suddenly and inexplicably surged by 10 magnitudes; it became 10,000 times brighter over a span of just a day or two, becoming as bright as a 4th magnitude star and hence dimly visible to the naked eye. The comet then quickly faded to near obscurity, but six weeks later in early July, it again surged dramatically in brightness to 4th magnitude, then rapidly faded again a few days later.

Nobody knows for sure why the comet abruptly flared in 1973, but careful scrutiny of recent approaches to the sun in 1995, 2001 and 2006 suggest that outbursts in brightness tend to occur around the time T-G-K is passing closest to the sun.

According to Japanese comet expert Seiichi Yoshida, who moderates the website "Weekly Information about Bright Comets" at http://www.aerith.net/comet/weekly/current.html: "Outbursts occur frequently. The (comet's) light curve is unpredictable in every apparition. Even if no major outburst occurs, it seems to have a trend of rapid brightening and fading around the (time of) perihelion passage."

Yoshida is predicting the comet will become as bright as magnitude +5.5 during early April; bright enough to be barely visible to the naked eye in a dark sky. Can it become brighter than this? Could another "eruption" like in 1973 take place? If that were to happen, the comet could become as bright as Sirius, the brightest star in the sky. But while we cannot rule such a circumstance out, let's just say the chances are very slim to almost none.

But, hey, so far as comets are concerned, you never know.

Out of curiosity, I wondered if Comet 41P/Tuttle-Giacobini-Kresák might ever make another unusually close approach to Earth. Using an orbit simulator, I inputted the latest orbital elements for the comet and moved forward in time and discovered that in May 2059, it will have come close enough to Jupiter to have its orbit altered slightly, moving it a bit closer to Earth's orbit.

And in early May 2066, Comet T-G-K will once again make another very similar (to 2017) close approach to Earth.

Editor's note: If you capture an amazing photo of Comet 41P/Tuttle-Giacobini-Kresák through a telescope and would like to share it with Space.com, send images and comments in to: spacephotos@space.com.