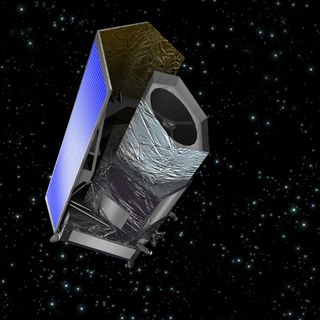 Euclid is a mission planned by the European Space Agency (ESA) that aims to learn more about the parts of the universe we can't see — specifically, dark energy and dark matter. These form most of the universe and are thought to be responsible for phenomena such as the acceleration of the universe's expansion.

Euclid is expected to launch in 2020 from French Guiana aboard a Soyuz rocket. It will take roughly 30 days for Euclid to make its way to its planned location in space, which is a gravitationally stable area known as a Lagrange point. Euclid will be at L2, which lies about a million miles from Earth but in the opposite direction of the sun. At this point, with the Earth, moon and sun behind it, a spacecraft can get a clear view of deep space.

As a survey mission, Euclid will last at least six years and cover 15,000 square degrees of sky. Its survey will be performed as a "step and stare," meaning that the telescope will do measurements on about 0.5 square degrees of the sky at a time.

The ESA's current guideline for science missions is called Cosmic Vision 2015-2025. In 2007, a proposal process for Cosmic Vision resulted in two missions that were intended to measure the geometry of the universe: DUNE (Dark Universe Explorer) and SPACE (Spectroscopic All Sky Cosmic Explorer.)

DUNE was supposed to image the sky across a wide field to study dark energy and dark matter. Its primary measurement method was weak gravitational lensing. SPACE was supposed to create a 3-D evolutionary map of the universe across 10 billion years, by measuring galaxy redshifts and spectra. However, after an assessment study those two missions were combined into one: Euclid. (Euclid is named after an Ancient Greek mathematician who is sometimes called the "father of geometry.")

In 2011, ESA selected Solar Orbiter and Euclid as the first two of its medium-class or M-class missions, among several proposals. Solar Orbiter is expected to launch in 2018, and Euclid in 2019.

In 2013, NASA signed a memorandum of understanding with ESA to provide 20 detectors for Euclid's near-infrared instrument. NASA also nominated 40 U.S. scientists to join the Euclid consortium, which builds the instruments and will later parse the mission's science data. Later that year, Italy's Thales Alenia Space was selected as prime contractor for the mission. Euclid passed its preliminary design review in 2015, and the first parts of the flight hardware — four detectors for the visible imager – were delivered to ESA in early 2017.

We can only see a fraction of the known universe. Ordinary matter makes up about 4 percent, while dark matter makes up 20 percent and dark energy makes up 76 percent. Understanding more about dark matter and dark energy could help scientists, for example, learn why the universe is accelerating in its expansion. There is not enough "ordinary" matter to account for the acceleration.

Euclid will show scientists more about the dark universe. One of its main goals is to accurately map galaxy redshift, which occurs when an object moves away from us. The light shifts to the red end of the spectrum, as its wavelengths get longer. If an object moves closer, the light moves to the blue end of the spectrum, as its wavelengths get shorter. The mission will look back to galaxies that formed as early as 10 billion years ago, or more than double the solar system's age. In its prime mission, Euclid will map about half of the sky.

Specifically, Euclid's detectors are supposed to conduct two cosmological probes. One will study weak gravitational lensing, which happens when a concentration of matter bends light as light travels toward the observer. This is useful for mapping dark matter and for inferring dark energy by measuring how much galaxy images are distorted by the lensing.

The other probe will study baryonic acoustic oscillations (BAO), which measures the spatial distribution of galaxies. Across very large scales, galaxies tend to cluster in pairs separated by a standard distance. This standard distance is linked to sound waves in plasma (supercharged gas) from the early universe; the sound waves propagated from dark matter halos, or concentrations of dark matter associated with galaxies. BAOs are therefore a standard ruler to measure the universe's expansion, and dark energy as well.

Euclid's science will be performed by two instruments, and the spacecraft's 1.2-meter mirror will split light between them for analysis:

The overall goals of Euclid (in ESA's words) are:

Dark matter is still a relatively young science, but there have been some observations by other space missions to assist with Euclid's work.

The Fermi Gamma-ray Space Telescope launched in 2008. One of its science goals is to look at dark matter, specifically by probing phenomena such as excess gamma-rays from the Milky Way's center. In 2014, NASA announced that the excess emission seen in that area "is consistent with some forms of dark matter." In 2017, observations of the nearby Andromeda Galaxy revealed the same phenomena.

Other space missions have glimpsed dark matter, even though it wasn't in their primary missions. One example is a 2015 study of 72 galaxy cluster collisions that used data from both the Hubble Space Telescope and the Chandra X-Ray Observatory. At the time, scientists said the study helped set limits on the nature of dark matter. "Astronomers can map the distribution of dark matter by analyzing how the light from distant sources beyond the cluster is magnified and distorted by gravitational effects," the Harvard University Chandra X-Ray Observatory page said in a press release.

Hubble also performed a survey that helped map out the distribution of dark matter in the universe, NASA said in a 2007 press release.

ESA's Gaia mission launched in 2013 to create the most accurate map of star locations in the sky. It is thought that charting their movements will reveal more information about the nature of dark matter, and how it influenced the universe's history.