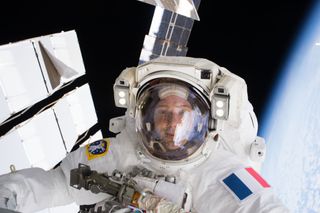 French astronaut Thomas Pesquet takes a moment to pose during a spacewalk outside the International Space Station in January 2017.
(Image: © NASA Johnson/Flickr)

Astronauts are gearing up for three spacewalks outside the International Space Station that will culminate in the station's 200th spacewalk.

The first and second spacewalks are scheduled to occur over the next eight days and will help prepare the station for commercial spacecraft carrying crew to be able to dock. One of them is also aimed at upgrading the station's capability to host Earth-observing instruments. Each will take about 6.5 hours.

"Here we come to the 200th spacewalk and we're still not just fixing things, but improving things and expanding capability and adding functionality … continuing to build the space station over time," NASA Flight Director Emily Nelson said during a news briefing today (March 22). "The first half of the [space station] program was about building this enormous facility that's now producing all this amazing scientific research, and we don't just go outside to fix things — most of [these three spacewalks] is about improving and expanding." [Astronaut's-Eye View: Stunning Spacewalk Video from Space]

The first of the three spacewalks will see American astronaut Shane Kimbrough and French astronaut Thomas Pesquet setting out at 8 a.m. EDT (1300 GMT) Friday (March 24), and you will be able to watch it live on Space.com, courtesy of NASA TV. American astronaut Peggy Whitson will be inside, controlling the robotic arm help her crewmates.

Next, Kimbrough and Whitson will venture out March 30 (nobody on the robotic arm). Those two spacewalks are largely devoted to opening up space for a second International Docking Adaptor, which will allow future commercial spacecraft to dock with the station.

Right now, only Russia's Soyuz spacecraft can dock to bring people aboard — astronauts have to use the robotic arm to grab and berth commercial spacecraft, like SpaceX's Dragon and Orbital ATK's Cygnus, which bring cargo to the station. NASA has contracted with SpaceX and Boeing  to eventually send crew to the space station, and those arrivals in the coming years would use the new docking ports.

Whitson and Pesquet will conduct the third spacewalk, currently scheduled for April 6 with robotic help from Kimbrough inside. They will install an avionics box, set to be launched on a Cygnus spacecraft soon, that will let scientists install more experiments outside the station to take measurements and monitor Earth.

However, that Cygnus launch was further postponed today because of an issue with the Atlas V rocket's booster — the third spacewalk will have to be rescheduled if it's set to arrive too late, since the astronauts will have to wait for the box's delivery.

Kimbrough, Whitson and Pesquet have been studying the procedures for the first spacewalk over the past week — interspersed with the usual research aboard the orbiting lab as well as chatting with NASA fans through Facebook Live and talking with France's president, respectively.

After the three spacewalks wrap up, Kimbrough and Russian cosmonauts Andrey Borisenko and Sergey Ryzhikov will be heading back to Earth in a Soyuz spacecraft, and two more crewmembers — including first-time NASA flier Jack Fischer and Russian cosmonaut Fyodor Yurchikhin — will head up, bringing the crew count back to five.